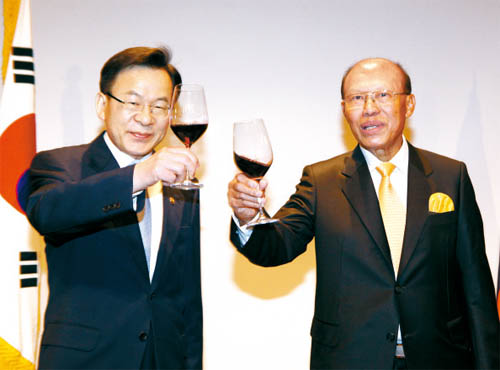 Soukthavone Keola, the Laotian ambassador to Seoul, left, and Hwang Hee-chul, Korean vice minister of justice, celebrate the 15th anniversary of diplomatic ties between Laos and South Korea at the Shilla Hotel in Seoul on Friday. By Jeon Min-gyu


The Laotian Embassy in Seoul marked the 35th anniversary of the founding of the Lao People’s Democratic Republic and the 15th anniversary of Laos-Korea diplomatic relations during a ceremony at the Shilla Hotel in Seoul, with roughly 200 visitors participating.

At the event, Laotian officials expressed their hope of building an even stronger mutual economic relationship with South Korea.

“The Lao People’s Democratic Republic and the Republic of Korea started diplomatic relations in 1995, and since then, friendship and cooperation have developed step by step for our mutual interests,” said Soukthavone Keola, the Laotian ambassador to Korea.

“Currently, the Republic of Korea is ranked number six in foreign investment in Laos with more than $500 million and with a stake in 152 projects,” the ambassador said. Laos and South Korea established their first diplomatic ties in 1974, but a year later, bilateral relations were broken, when Laos became Communist. Diplomatic ties between the two countries resumed in 1995.

“In 2002 and 2008, the Laos prime minister came to Korea for an official visit, and in 2004, former President Roh Moo-hyun of the Republic of Korea visited Laos to attend the Asean Summit, as well as a bilateral summit with Laos,” the ambassador said.

The two nations have connections not only in economic and sociocultural areas, but in memories shared during their colonial periods in the 20th century.

Laos had been colonized by France and Japan during 20th century and Korea also was under Japanese control.

“From this common ground, I believe bilateral relations will be stronger in the future in expectation of a Korea-Asean FTA,” said Hwang Hee-chul, vice minister of the Korea Ministry of Justice.