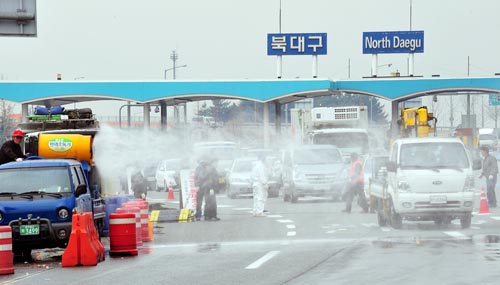 Cars entering Daegu are disinfected in an effort to stop the spread of food-and-mouth disease at the North Daegu toll gate yesterday. [YONHAP]


Foot-and-mouth disease (FMD) is spreading at an alarming rate, with the number of infected farms increasing to 30 and with more than 88,000 animals slaughtered as of yesterday, according to government officials.

All of the infected farms are still in North Gyeongsang. Health officials, nonetheless, are beefing up quarantine measures as a precaution.

Meanwhile, suspicious cases of FMD that were reported on Sunday in Daegu, 100 kilometers (62 miles) from the initial outbreak area and Cheongdo, North Gyeongsang, 112 kilometers away, turned out to be negative.

The area of concern still remains within a 30-kilometer radius of the epicenter - near Andong - with Yecheon, North Gyeongsang, marking the farthest spot the outbreak has reached, at 29 kilometers from the epicenter.

Another farm in Uiseong, North Gyeongsang, reported symptoms of the disease in its cattle yesterday. The farm is about 30 kilometers from the epicenter.

The Ministry for Food, Agriculture, Forestry and Fisheries has set up 298 quarantine posts nationwide, including 180 posts in Andong and its outskirts. As a precaution, the National Veterinary Research and Quarantine Service has secured vaccines for 300,000 livestock, while requesting raw materials for 3 million more vaccines from a U.K. pharmaceutical company.

The government, though, is trying to refrain from using the vaccine, because it would lose its FMD-free status from the World Organization for Animal Health (OIE) for at least a year.

The country lost its FMD-free status on Nov. 29 because of the confirmed FMD cases.

South Korea employed the FMD vaccine in April 2000, when the virus first appeared in the country, and it took a more than a year to regain its FMD-free status.

Sohn Han-mo, an official at the national veterinary service, said the export of animal products will be badly hurt if the vaccine is used.

“We are stepping up every effort to establish a double and a triple quarantine zone.”