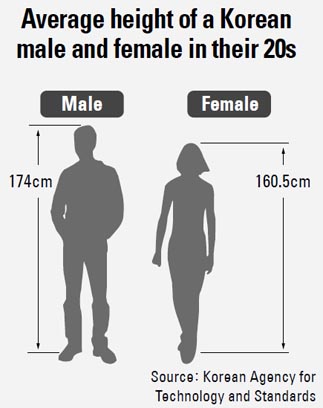 When the Korean Agency for Technology and Standards looked into the body types of 14,016 people aged 7 to 69 this year, it found that Koreans’ body types had become more “Westernized,” especially among young people.

According to the agency, which is under the Ministry of Knowledge Economy, a “Western body type” is associated with longer legs and slimness, among other things.

The agency explained yesterday in a press briefing at the government complex in Gwacheon, Gyeonggi, that the average person in his or her 20s was found to have longer legs.

The percentage of people in all age groups found to be overweight or obese decreased from seven years ago - especially for those in their 50s and 60s.

The study released yesterday showed that the average height of Koreans - 174 centimeters for men and 160.5 centimeters for women - remains unchanged since 2003 “due to ethnological reasons,” according to the report.

The agency has been conducting such research once every five to seven years since 1979.

It takes into consideration 136 categories, including height, sitting height, chest size and weight. The most recent survey is the sixth time it has been conducted.

“The average height of Koreans has been almost unchanged since the last time we conducted this research in 2003,” said the agency official at the press briefing.

“The research showed that Korean men and women only grow four or five centimeters after they turned 15 years old and 12 years old, respectively,” the official added.

The Korean Agency for Technology and Standards said the survey was conducted over a period of nine months from March to November this year.