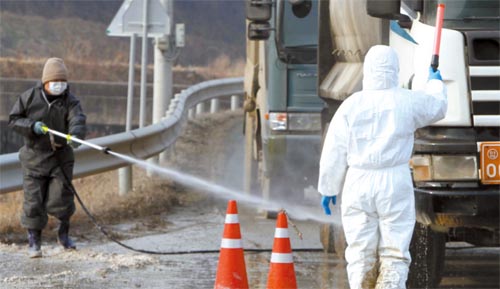 Health officials disinfect a vehicle passing through Hoengseong, Gangwon, where some of the nation’s best-known beef brands are produced. The county was confirmed for foot-and-mouth disease yesterday. [YONHAP]


When residents of Hoengseong, Gangwon, heard yesterday that a cattle farm in the area had tested positive for the deadly foot-and-mouth disease, there were sighs of dismay all around.

Hoengseong is home to some of the best-known beef brands in the nation. Annual sales of Hoengseong beef are estimated at approximately 80 billion won ($70 million). Confirmation of the highly contagious virus is expected to have an adverse effect on both livestock farms and the local economy.

After two farms in Gangwon were confirmed as infected Wednesday, local officials carried out full quarantine measures to curb the disease’s spread. Eight quarantine posts were set up and all shipments of livestock products were banned.

Hoengseong residents were struck by the news that the disease had infiltrated their village.

“After I found out that FMD was found at a neighboring farm, I feel sad and afraid,” Gangwon resident Yun Bok-sun, 68, said. “I only pray it stops as soon as possible.”

Residents steeled themselves and helped out by spraying quicklime, which is used for disinfection.

Noh Jae-myeong, 52, who has a cattle farm 2 kilometers (1.24 miles) from the epicenter in Gangwon, said that residents are “working day and night” to prevent FMD from infecting the 300 cows in his village.

Gangwon County Governor Go Seok-yong announced yesterday that the county will vaccinate animals to lessen the risk of infection.

“The FMD quarantine measures are a matter of life and death for Hoengseong beef,” Go said. He added that if animals continue to be slaughtered, losses are expected to reach around 500 billion won.

All 27 cows at the farm in Hoengseong, along with 44 heads of cattle at three farms nearby, were slaughtered and an additional 16 quarantine posts were established within a 3- and 10-kilometer radius of the Hoengseong farm.

Hoengseong has 44,000 cattle, the largest number in the province. Five cities in the province had been infected by FMD as of yesterday: Pyeongchang, Hwacheon, Chuncheon, Wonju and Hoengseong. Two farms in Cheolwon and Yangyang that had reported possible symptoms of the disease were both confirmed negative yesterday.

The Ministry for Food, Agriculture, Forestry and Fisheries will vaccinate 133,000 cows in Andong, where the disease was found on Nov. 29. Vaccines will also be given to animals within a 10-kilometer radius of contaminated farms in Yecheon, North Gyeongsang, and farms in Paju, Yeoncheon and Goyang, Gyeonggi.

The government estimates about 278,530 heads of cloven-hoofed animals have been slaughtered thus far. Losses to the livestock industry are estimated at 270 billion won.