Leaving on a jet-bound train: 43 min. to Incheon

Leaving on a jet-bound train: 43 min. to Incheon 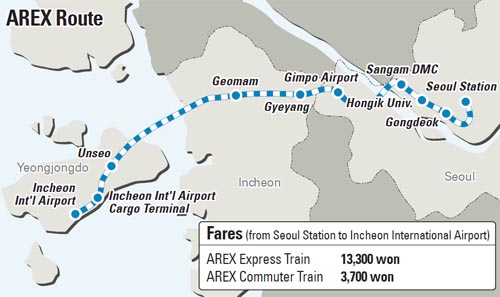 The long-awaited express train from downtown Seoul to Incheon International Airport starts service today, cutting down travel time, allowing in-town check-in for some airlines, and even giving a choice of two fares for travelers on a tight budget.

The Incheon International Airport Railroad (AREX) linking Seoul Station to Incheon International Airport will whisk travelers to their flights in 43 minutes, roughly 15 minutes shorter than via airport limousine. The fare is 13,300 won ($11.59) and makes no stops. The express train runs every 30 minutes, and operating hours are from 5:30 a.m. to 10 p.m.

A local train with 10 stops runs the same Incheon route in 53 minutes and only costs 3,700 won. The stops include Hongik University, Digital Media City, Gimpo Airport, Gyeyang, Geomam, Unseo and Incheon International Airport Cargo Terminal. (Gongdeok Station will open at the end of next year.) The hours of the commuter line are 5:20 a.m. to 12:00 a.m.

Travelers departing for Gimpo Airport can use the local line from Seoul Station. The trip takes 19 minutes and costs 1,200 won.

Travelers departing Incheon on Korean Air, Asiana Airlines and Jeju Air can check in at Seoul Station, select their airline seats and surrender their luggage, and more airlines will be offering the service in the future.

Only passengers taking the express train can check in at Seoul Station.

Immigration services will also be available at Seoul Station in the future, according to the Ministry of Land, Transport and Maritime Affairs, but it didn’t say when.

With the new service from Seoul Station, travelers will be allowed to check in and check their luggage in the morning, go to work or tour around Seoul, and head to the airport in the afternoon or evening.

The new trains will also allow Incheon residents to commute to Seoul in a shorter time. Currently the commute takes more than two hours by express bus.

Analysts said the new line will benefit residents of and visitors to western and northern Seoul, but people from the south side of the Han River are better serviced by airport limousines, which take roughly an hour to get to Gangnam.

Four airlines allow departure procedures at the inner-city terminal in Samseong Station in Gangnam, but it has no direct train to either Incheon or Gimpo airports.