Police: Scam artists are on the prowl

Police: Scam artists are on the prowl 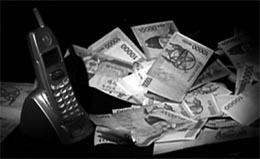 The Seocho Police Station said yesterday that in recent voice phishing attacks - a scam in which victims are solicited over the phone - the criminals are pretending to be abductors and are targeting high-income residents in Gangnam, southern Seoul.

The police offered the following case as an example.

A 52-year-old mother living in Seocho-dong, Seoul, said she got a phone call at 6 p.m. Friday when she was home alone. It was a man whose voice sounded much like her eldest son’s, saying, “Mom, it’s me, I’ve been stabbed.”

Another man got on the phone and said, “My brother who needs money stabbed your son with a knife. If you send 20 million won [$17,937] immediately, we’ll take him to the hospital.”

The mother said she had only 10 million won available. The man told her to send that money, threatening, “If you do something suspicious, I will kill your son.”

Meanwhile, the woman’s youngest son came home. She wrote a note saying, “Your elder brother has been abducted. But don’t report it to the police, ever.”

She then transferred 10 million won from a bank near her apartment. After confirming that the money was there, the man ordered her to send him another 10 million won.

She begged him, “Can’t you be satisfied with 10 million won?” but the man said, “I know you live in an [expensive] apartment, and I bet you are capable of giving me the money.”

Eventually, she borrowed the additional 10 million won from a friend and sent it to him.

While he was asking her to send money for a third time, her youngest son ran to her, saying, “Mom, I’ve just talked to my brother on the phone, and it’s a scam.”

The youngest son called the police and she hung up the phone. She called the bank to stop the payment, but the man had already withdrawn 18 million won.

Afterward, the woman said, “My friend was surprised to hear that I was victimized by the voice phishing scam because I’m an educated person who studied in America for three years and worked for 30 years.

“Voice phishing is a serious matter and I’m worried that elderly people, who know less about the world than me, will be [even more] subject to exploitation.”

Seocho police said the number of voice phishing cases has doubled in the past three months, and many victims live in Gangnam or Seocho, which is home to some of the city’s most wealthy residents.

According to the agency, many criminals pretend to be from the National Tax Service or Financial Supervisory Service, or from police, banks or the postal service.

To prevent an attack, a person who gets a phone call asking for a ransom to ensure the safety of relatives or friends should call the police and then contact the person in question to determine their whereabouts, the police agency said.