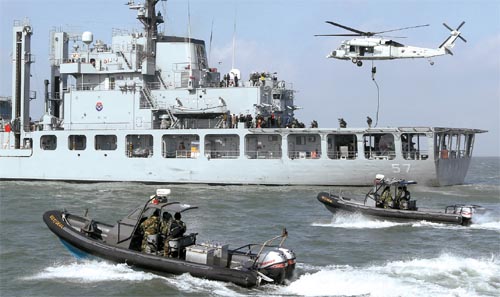 Korean UDT/SEAL commandos stage an operation in an anti-terrorism drill on Saturday in the Yellow Sea, near the Navy’s 2nd Fleet Headquarters in Pyeongtaek, Gyeonggi. The commandos used high-speed rubber boats and UH-60 helicopters to combat mock pirates hijacking a ship. [YONHAP]


State-of-the-art surveillance technology used by the Korean military contributed to the successful rescue of the Samho Jewelry and its crew, military officials said yesterday.

The officials also credited the Navy special forces’ rigorous discipline, in addition to cooperation from allied forces and the wits of the pirated ship’s captain.

Thursday’s rescue operation, which ended the Somali pirates’ week-long seizure of the Korean chemical carrier, was a big boost for a military bitterly criticized for lax responses to last year’s attacks from North Korea. All of the Samho Jewelry’s 21 crew members, including eight Koreans, were rescued alive. The ship’s captain, Seok Hae-gyun, sustained a gunshot wound to the stomach, but is not in life-threatening condition. Three special forces soldiers were wounded. Eight pirates were killed in the rescue, and five others captured.

According to officials at the Ministry of National Defense, state-of-the-art monitoring systems helped military commanders in Seoul deliver swift commands to the rescuers. Navy special forces mobilized in the operation wore wireless video and audio recording systems - called Kaishot - on their helmets and could transmit real-time information about the pirates’ moves to commanders in Seoul, the officials said.

A Long Range Acoustic Device (LRAD) on the destroyer Choi Young also helped reduce the number of casualties because the Navy could tell the captured Korean crew members where to position themselves safely during the operation, the officials said. The LRAD is a relatively new technology sometimes used in cities to disperse protestors.

“High-tech electronic device are proving to be increasingly useful in this kind of mission,” said a government official. Government agencies are considering requiring Korean ships to install more electronic surveillance devices, he said.

About 20 Navy special forces called UDT (Underwater Demolition Team) were mobilized to rescue the crew during the operation. According to those familiar with piracy off the eastern coast of Africa, scores of rescue operations get attempted near the Gulf of Aden every year, but it is rare for all the hostages to be rescued safely.

“Called a human arsenal, UDT members are selected through a 24-week basic training process, the longest such process in all Korean military branches, as well as a special training program measuring abilities like diving, bomb-planting, information-gathering and man-to-man combat,” said a military official.

The officials said that in order to enhance precision, UDTs practice shooting 10 times a month.

Cho Young-joo, the commander of the Choi Young, said in a joint telephone interview with reporters that another tactic to disorient the pirates also worked in the operation.

“Three days before we went into the final operation, we implemented training in which the Choi Young, Lynx helicopter and speedboat attempted to close in on the ship. That’s how we could catch the pirates off guard when we started the real operation,” he said.

Seok, the Samho Jewelry’s captain, also helped the operation by fooling the pirates, communicating with Korean commanders without their knowledge and slowing down the ship, the officials said.

Seok told the pirates that the ship had run out of food, and to make them believe it, he fasted for almost six days. He didn’t tell them where the food was stored.

“According to telephone records, the pirates said they were having difficulty because of hunger,” said a government official.

The lack of nourishment, and sleep shortage, weakened the pirates’ ability to repel the rescue operation, the official said. When the pirates ordered Seok to call Samho Shipping - the owner of the captured ship - to negotiate a ransom, he took advantage of the pirates’ ignorance of Korean to keep the company and the military informed of conditions on the ship.

The commander of the Choi Young said allied forces provided information, sent a P-3 surveillance aircraft and helped evacuate the wounded. Korea has security agreements with 17 countries that have a total of 30 ships that can be called on for rescue operations against pirates.

“There’s a great deal of cooperation among countries, and I think this is just an example of that,” said U.S. Assistant Secretary of Ctate Philip Crowley, during a media briefing on Friday, referring to the coordinated operation to rescue the Samho Jewelry.