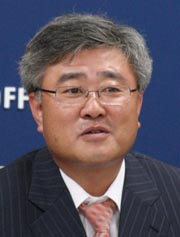 “I think the time has come, so I am leaving the prosecution,” Nam, the head of the Seoul Western District Prosecutors’ Office, said in a letter he posted on the Intranet of the prosecutors’ office yesterday morning.

“I also seek forgiveness from those who were hurt by my narrow-minded thoughts,” Nam also wrote.

It was not immediately clear why Nam abruptly tendered his resignation, but a prosecution official said Nam appeared to be taking responsibility for the growing disapproval of a high-profile probe by his office.

“After the warrant requests to arrest five suspects in the Hanwha Group case were all turned down, criticism rose that his office was going after the conglomerate out of sheer obstinacy,” the official said.

The Seoul Central District Court on Monday struck down the prosecutors’ request of arrest warrants for five former or current officers of Hanwha, fueling criticism inside the business community that Nam was pushing the probe too far. The prosecution was also criticized for trying to get suspects to confess without material evidence.

Based on a whistle-blower’s tips, Nam’s office opened an investigation into the nation’s 10th largest conglomerate in September on the suspicion that group Chairman Kim Seung-youn embezzled company money and maintained a slush fund of about 107 billion won ($95 million). In December, prosecutors summoned Kim for questioning three times.

According to sources, the five-month probe into Hanwha will soon wrap up when the prosecution files indictments against 14 former and incumbent executives of the group including Chairman Kim.

Speculation also spread that Nam’s resignation was in protest of the Justice Ministry’s expected move to replace him. The ministry yesterday announced the reshuffling of top prosecutors, but Nam’s post was not a part of it.

“From the beginning, he was not a subject of the reshuffle,” said a Justice Ministry official. “We are baffled that Nam has abruptly tendered his resignation.”

As Nam’s move was unforeseen, no announcement on his successor was made yesterday, while the ministry reshuffled top tier officials.

Since last year, no reshuffle in the upper echelon of the prosecution took place, prompting yesterday’s move. As Roh had been leading the Seoul Central District Prosecutors’ Office since August 2009, a significantly long period of time for the position, insiders in the prosecution said a reshuffle was necessary.