Hero captain was caught in crossfire

Hero captain was caught in crossfire 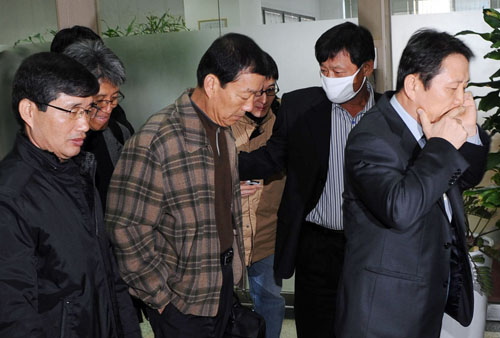 Crewmen of the Samho Jewelry, who were rescued last month by the South Korean Navy from Somali pirates, visit the office of their employer, Samho Shipping, in Busan yesterday for the first time since their ordeal ended. [NEWSIS]


After examining bullets removed from the body of Seok Hae-gyun, the heroic captain of the Samho Jewelry, the Korea Coast Guard said yesterday it has concluded that one was from friendly fire - a shot fired by the naval unit that rescued the ship from its Somali pirate hijackers.

“We received three of [four] bullets removed from Seok’s body and one we assume was shot from a MP5 submachine gun that our Navy uses,” Kim Choong-gyu of the Coast Guard’s special investigative team said during a press conference yesterday. “One of the three bullets was from an AK-47 rifle that the pirates were using and another turned out to be a small [metal] fragment that found its way into Seok’s body because of a ricocheting bullet.”

The bullets are still being examined by the National Forensic Service and Kim was unable to answer which bullets caused Seok’s major wounds.

In total, four bullets were removed from Seok’s body, two during surgery in Oman and two in Korea. One is missing: the South Korean doctor who treated Seok in Oman, Lee Guk-jong, lost it on his way back to South Korea, but transported the second. Lee reported to police that he lost all of his belongings while in Oman.

When asked to explain why the South Korean Navy rescuers had fired at Seok, Kim said, “At the time of the military operation, the LYNX helicopter fired multiple rounds at the vessel. It was dark because it was dawn and it was a very chaotic situation.”

The Joint Chiefs of Staff responded to the Coast Guard’s report yesterday: “During the operation, when the special forces made their way onto the ship, Captain Seok was already down from shots fired from the pirates.”

But the Joint Chiefs of Staff said they could not rule out the possibility that the one bullet assumed to be from the Navy could have ricocheted off the ship during crossfire. The military also said that the assumptions could only be confirmed after results from the National Forensic Service are released.

Kim of the Coast Guard also said yesterday that Arai Mahomed, the Somali pirate suspected of having shot Seok, is likely to be proven as the shooter by prosecutors because “two Koreans and two foreign crew members of the Samho Jewelry, as well as two pirates that were captured, have given clear statements that identify Mahomed as the shooter.”

Kim said authorities expect more progress in the case when Seok is conscious. The captain regained consciousness briefly over the Lunar New Year holidays after doctors removed his respirator, but has been unconscious again since then.

The Coast Guard said the pirates stole 27 million won ($24,460) worth of goods during the hijacking, including computers, shoes and cash from the Samho Jewelry crew.