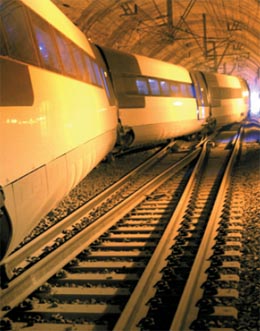 The KTX train derailed on a track near Gwangmyeong Station on Friday. [YONHAP]

Human error was responsible for the derailing of a KTX train last Friday - lots of human error.

And the Blue House announced yesterday that three of the 10 cars on the derailed train were private cars for President Lee Myung-bak, though the president wasn’t on board at the time.

According to the Ministry of Land, Transport and Maritime Affairs yesterday, the train was derailed by a small nut and bolt in a switching box that hadn’t been tightened by a repairman.

The loose nut set off alarms in the train surveillance center, which controls KTX trains, three times, and several trains were allowed through the Iljin tunnel on different tracks.

But after a communication lapse, the Seoul-bound “Sancheon” hit the faulty tracks and derailed at 1:05 p.m. Friday about 500 meters (0.3 miles) away from Gwangmyeong Station in Gyeonggi. Six of the train’s 10 cars jumped the tracks.

It was the first derailment for the 7-year-old KTX system.

“The reason for the derailing of the KTX train was that a control box attached to the track [in the tunnel] had been poorly repaired,” the ministry said.

According to the ministry, a repairman from Korea Railroad Corp. worked in the tunnel at about 1:30 a.m. Friday changing cables in a switching box attached to the track in the tunnel. The repairman also changed several nuts and didn’t tighten one nut that was 7 millimeters (0.28 inches) in diameter.

The switching box helps trains switch from one set of tracks on the left side of the tunnel to a set on the right-hand side. If it malfunctions, it can’t align the switching tracks properly.

Because of the loose nut, the switching box sent a series of three error signals to the train surveillance center. Korail sent a group of repairmen to the box at 7:30 a.m, but they failed to find the loose nut. They decided to fix the box later and manually manipulated the box to let all KTX trains go through the tunnel on the tracks on the left, not the ones on the right side.

“As most KTX trains entering Gwangmyeong Station go straight forward, the repairmen made that decision, we guess,” the ministry said.

But the repairmen didn’t tell the train surveillance center what they had done. Without knowing of the problem, the center ordered the Sancheon to switch to the track on the right, but the switching box malfunctioned, leading to the derailment.

The ministry said the train was initially supposed to use the safe, left-hand tracks. But it was 3 minutes behind schedule, and the surveillance center decided to use the right-hand tracks to shave a few seconds off its travel time.

“If the repairmen and the center had fully communicated with each other before the train entered the tunnel, the accident would have been prevented,” the ministry said.

But the ministry said that it was continuing to investigate the accident.

“Whether the loosely tightened nut was caused by a mistake by the repairman or not should be discovered through an in-depth investigation,” the ministry said. “The nut could have become loose by a malfunction of the switching box.”

According to the Blue House, the derailed train contained three presidential cars, although President Lee wasn’t traveling on it that day.

The presidential cars include an office, conference room and other facilities, according to the Blue House. They are off-limits to the public.

The presidential cars were among the front four cars that didn’t derail and weren’t damaged.

An official from Korail said it was still waiting to find out the exact reason for the accident. Korail said the repairmen weren’t regular workers for the state-run railroad corporation, but were hired from a private company temporarily.

“According to our working system, outside temporary workers rarely report any malfunctions to the center directly,” an official from Korail said. “And it appears the repairmen on Friday didn’t report the problems in the switching box to the center as well.”

Korail has increasingly hired temporary repairmen. Its union argues the practice could threaten the safety of passengers on trains, an official from the union said.

“We believe that the derailment was caused because Korail is increasingly outsourcing its repair work to private contractors, not inspecting tracks and facilities with its own workers,” an official from the labor union said. “An overall re-evaluation of the safety of trains and the repair work should be done soon.”

All KTX trains are now running on normal schedules.