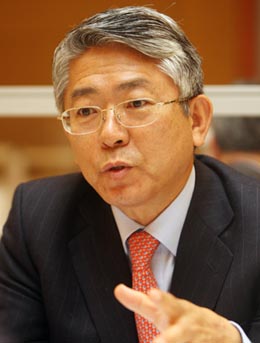 Kim Hong-rak, Korean ambassador to Bolivia, was awarded the “diplomat of the year” award.

Kim Hong-rak, the Korean ambassador to Bolivia, was named last year’s “diplomat of the year” at a ceremony on Feb. 28.

He was recognized for successfully re-establishing ties between the two countries after Korea reopened its embassy there in 2008. The embassy had been one of 14 that the central government closed down to save money after the onset of the Asian financial crisis.

The Korean Embassy in Bolivia was one of the five embassies reopened in 2008.

“When I presented my credentials to Bolivian President Evo Morales, I told him that ‘even though I don’t have a house right now, please visit once it is built,’” Kim said. “And the president, smiling, answered that ‘I always welcome a free meal and will visit you if you call me.’”

The 59-year-old Kim, who recently visited Korea to meet with entrepreneurs and attend meetings with Korean diplomats working abroad, is considered an expert in Spanish and Latin American affairs.

Kim served as deputy secretary for Korea’s embassies in Chile, Mexico and Panama from 1981 to 1991. He was also director of the Latin American and Caribbean Affairs Bureau at the Ministry of Foreign Affairs and Trade from 1995 to 1997.

“When I moved into the office of the Korean Embassy in Bolivia, which had reopened after being shut for a decade, I thought it was important to be close with high-ranking Bolivian government officials to recover ‘the lost decade’ between two countries,” Kim said.

Although the Bolivian president could not attend the opening ceremony of the Korean Embassy in person in March 2009 due to a previously scheduled business trip, he sent a high-profile delegation in his place, including Garcia Linera, vice president of Bolivia.

Later, the Bolivian president twice attended banquets held at the embassy, drawing public attention to his unusual visit to a foreign embassy.

As part of efforts to develop a friendship with the Bolivian president, Kim invited Morales to Korea in August 2010.

It was the first summit for the two governments since establishing diplomatic relations in 1965.

At the meeting, the two presidents signed a memorandum of understanding on research and development for the commercialization of evaporation resources in the Uyuni Salt Flats, which are known to have more than 5.4 million tons of lithium reserves - a crucial component in rechargeable batteries.

“Korean companies have recently shown great interests in developing natural resources and building infrastructure in Bolivia,” Kim said. “Last year, we had only two Korean corporations ask for advice on investing in the country, but now, nine corporations have requested related information.”

Kim, however, warned that excessive competitiveness among Korean companies to secure natural resources in Bolivia could backfire, as it would make negotiating with the Bolivian government more difficult.

“Support from the government and active efforts of Korean companies to develop the resources are also important, but too much competitiveness should be avoided,” Kim said.

Kim pointed out that Japanese companies closely cooperate with their government to win contracts with foreign governments, while Korean companies have a tendency to lose many deals because of a lack of coordination.

Kim also highlighted the importance of promoting Hangul in Bolivia, along with Korean culture.

Since last year, Kim said he has devoted his weekends to teaching Hangul to the Aymara tribe.

“The people of the Aymara tribe liked the lessons, and the Bolivian foreign minister asked me to teach more,” Kim said.

“As the tribe has about 2 million people, we expect the lessons will have a great effect on the country of Bolivia,” Kim added.