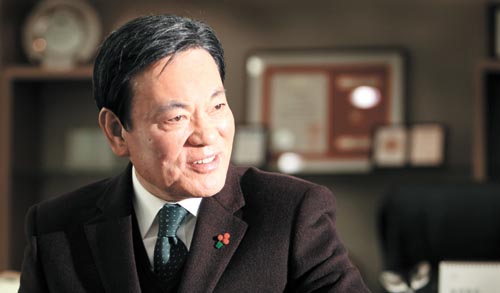 
Park Soon-ho, chairman of Sejung Group, has no shortage of experience in his field.

Ever since he started his own business in 1974 selling undergarments at a market in Busan, Park has had a knack for quality control.

Now 65, he still takes a hands-on approach in maintaining product quality - before his merchandise hits the market.

“I personally oversee the production of the products we make, from underwear to T-shirts,” Park said. “I’ve always believed that the key to success is not found sitting behind a desk. If I’m not satisfied with a certain product, neither are our consumers.”

Today, the group has 11 subsidiaries in a broad range of fields, including retail, construction and IT, though 93 percent, or 890 billion won, of the group’s revenue comes from the fashion side of its businesses.

Sejung is one of the top fashion retailers in the country, along with Cheil Industries, LG Fashion and E-Land. The conglomerate counts fashion brands Indian, Olivia Lauren and NII as key product lines.

Sejung differentiates itself by concentrating on street-level shops, while other fashion brands mostly retail their brands in shopping malls across the country. Sejung has close to 900 street-level outlets, more than any other fashion retailer.

Park’s passion for fashion dates back to his early childhood.

“I was so poor when I was young that my shoes fell apart and my toes poked through the ends,” he said. “I didn’t feel a need to study, but was overwhelmed by a need to earn money.”

He left Masan, Gangwon, for Busan when he was 23-years-old. While wandering the streets, he was hit with the idea that he could make money selling clothes at a local market.

He started with undergarments, then moved on to T-shirts, and eventually established a small company of his own.

His enthusiasm was evident during an interview at his headquarters in southern Seoul. During the interview, he was meticulously checking every detail of hundreds of fur coats, categorizing them into two groups: ones good enough to be shipped to his stores and ones that were not.

The chairman said that while other fashion retailers manufacture their apparels overseas to save on labor costs, Sejung makes its products in its factory in Busan.

“I believe in this animal-life instinct [when choosing the right kind of clothes],” he said. “For 37 years, I’ve been in this field and have accumulated experience.”