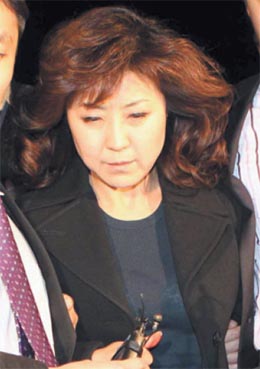 For the first time in more than three years, Erica Kim, who had shaken the 2007 presidential election campaign by accusing then-front-runner Lee Myung-bak of being involved in a financial scam, appeared before the media Wednesday night in a surprising and mysterious return to Korea.

Shortly before the presidential election, Kim, a 47-year-old Korean-American, and her brother, Kyung-joon, claimed that Lee was the beneficiary and mastermind of the BBK stock price manipulation scandal.

Kim Kyung-joon and Lee were business partners from 2000 to 2001 and operated BBK, an investment firm.

While her brother was serving prison time in Korea for falsely accusing Lee and violating the country’s election law, Kim, a former U.S. attorney, disappeared from the public eye for three years and four months until her surprise return to Korea last month.

After undergoing 13 hours of questioning on Wednesday, Kim stepped out of the Seoul Central District Prosecutors’ Office at about 11:30 p.m. and said to the media, “I am sorry, I am sorry.”

She refused to answer any questions while rushing to her car. This was the second time Kim has been questioned since her return on Feb. 25.

According to prosecution sources, Kim was questioned over whether she had colluded with her brother in his embezzlement of BBK money.

She was also asked about why she had accused Lee before the presidential election.

Kim and her brother also faced each other during cross-examination for about an hour on Wednesday, the prosecution said.

Prosecution sources said Kim admitted during the first questioning session that she made false accusations against Lee before the election. She also denied any involvement in the BBK case, the sources said.

The allegations exposed by the Kims grabbed the nation’s attention during the 2007 presidential election. About 5,500 investors lost money in the BBK scam, and the Supreme Court upheld the conviction of Kim Kyung-joon in May 2009 for embezzling more than 38 billion won ($33.8 million) in corporate funds and violating election law.

The court ordered him to serve eight years in prison and pay 10 billion won in fines.

The prosecution investigated Lee as the presidential election in 2007 drew near, but prosecutors cleared Lee of any involvement in the investment fraud on Dec. 5 that year, removing the last major hurdle for the candidate.

The next day, he won the presidential election, and the probe took place as promised.

It remains unclear, however, why Erica Kim abruptly returned to Korea. She had scheduled a press conference on Nov. 20, 2007, in Los Angeles to back her brother’s accusations against Lee, but canceled the session without explanation.

She has made no public appearance since then.

The opposition Democratic Party has alleged that the Lee administration is behind her return.

“She knows the Achilles’ heel of President Lee and this administration,” said Representative Jeon Hyeon-heui of the DP. “We wonder how she can return to Korea and surrender herself to the prosecution for questioning at this particular point.”

She argued that Kim’s appearance could have been arranged by the administration to close the case for good before its term ends.

“We believe this administration is trying to conceal the truth and close the case when it still has the power,” said DP floor leader Park Jie-won. “It is trying to stop the truth from getting out before its term ends.”

The Blue House and the Grand National Party have remained tight-lipped about Kim’s return, warning against political interpretations.

“It is a matter to be handled strictly by laws,” said GNP spokeswoman Bae Eun-hee. “The DP must not launch political attacks with unconfirmed rumors.”