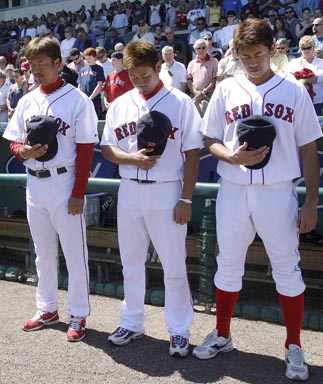 Boston Red Sox pitchers Hideki Okajima, Daisuke Matsuzaka and Itsuki Shoda pause for a moment of silence for victims of the earthquake and tsunami in Japan prior to facing the Florida Marlins Saturday. [AP/YONHAP]

As Japan continues to suffer after the worst earthquake and tsunami in its history and people around the world watch the aftermath with rapt attention, the sports world too has been affected.

Hundreds of people were killed or are missing in Japan as of Sunday and with disaster after disaster piling on an already-devastated Japan, the country’s sports stars have been trying desperately to get in touch with their families, while non-Japanese players and managers have extended their condolences.

“First of all, I offer my heartfelt condolences to the victims of this earthquake,” football national team coach Alberto Zaccheroni, who left Japan after the earthquake, was quoted as saying by The Associated Press. “[I am] looking forward to coming back as soon as possible to work with the people of Japan again.”

The Japanese national football team’s exhibition games against Montenegro and New Zealand later this month are in question following the 8.9 magnitude earthquake, and the Asian Football Confederation Champions League has postponed its matches scheduled to be played in Japan tomorrow and Wednesday, according to The AP.

In addition, numerous Japanese sports stars competing internationally have been trying to contact their families to make sure they’re safe.

Japanese players at Major League Baseball spring training in the United States have tried contacting home - with varying degrees of success - with some deciding to go back to Japan temporarily.

Boston Red Sox pitcher Daisuke Matsuzaka told The AP on Saturday that he hasn’t been able to get in touch with his grandmother, while Seattle Mariners right fielder Ichiro Suzuki said he still hasn’t reached his family in the Nagoya prefecture.

“We don’t know yet because cellphones and power are down,” Ichiro told The Seattle Times. “There are 4 million people without power in Tokyo.”

Said Mariners manager Eric Wedge to The Seattle Times: “By all accounts the people [Ichiro and interpreter Anthony Suzuki are] close to are all OK, at least the ones they can get hold of. It’s a horrible tragedy, a sad situation.”

New York Yankees pitcher Kei Igawa made contact with his family and decided to return to Japan, ESPN.com reported Saturday.

UFC middleweight Yoshihiro Akiyama, a fourth-generation Japanese of Korean descent, also known as Choo Sung-hoon, withdrew from his scheduled UFC 128 bout against Nate Marquardt on March 19, according to ESPN.com. And star Japanese golfer Ryo Ishikawa, who scored his best PGA Tour round ever Friday at the WGC Cadillac Championship in Doral, Fla. with a 7-under-par 65, told ESPN that several golfers have come up to him expressing their concern.

“Many of the PGA players walked up to me, such as Ernie Els and Vijay Singh, and asked how was my family and showed a lot of concern,” the 19-year-old Ishikawa told ESPN through an interpreter. “And I appreciated that.”