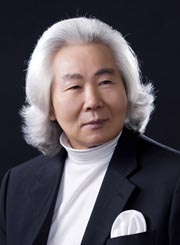 While many do not do much of anything as they enter their twilight years, others try to make a difference in industry - even after retirement.

Chung, who retired from the Korea Trade-Investment Promotion Agency after working there for over 30 years, devised a way to help importers and exporters after his career wound down.

He noticed a dearth of software and statistical data that exporters could access before entering new markets. There was a need to provide such information to exporters, not only in Korea, but everywhere in the world.

“There are about 5,300 products under the HS Code [Harmonized Commodity Description and Coding System], and it is extremely difficult for exporters to figure out the trade volume of certain products. Which markets are appropriate for certain products and which should be avoided?” Chung said his program has the answers.

“Since it is close to impossible for exporters to figure out such information on their own for about 150 countries around the world, I devised and created a new system by integrating trade-related information with information technology,” he said.

Chung’s system, named the Export Target Market GPS Roadmap, provides an effective solutions and information for international trade personnel. The program identifies where certain products could be most in demand, along with related region-specific information needed for trade.

The program was created with Visual Basic program coding and advanced macro scripting in the Excel spreadsheet program.

After his retirement from Kotra, Chung said he had plenty of opportunities to become a senior consultant in various capacities, but instead chose his current path.

Chung’s program offers numeric data on countries around world, which shows at what price a certain product is being sold. Then it provides contact points for importers according to country. There is also information on conventions and exhibitions around the world.

It took him just six months of training at a local IT institute then eight months to develop the program.

Chung said the program was created with trade personnel and CEOs in mind. In fact, the information can be available as fast as within two minutes of calculation.

All of the data was compiled from public information that is provided by sites such as Kompass and the CIA World Factbook.

Chung took an interest in data collection when he figured out the best way to get information related to North Korean trade was to do so not from the country itself, but from countries and companies it trades with - data which is publicly available if you know where to look.

He said that he found out back in 2007 the quantity of fertilizer that North Korea had exported to Thailand, beef to Turkey and imported mass amounts of canned animal food with less than a 1 percent margin of error.

He found out recently that North Korea exported electricity to China, even though the impoverished country cannot keep its own lights on due to power shortages.

“No other organization can provide such detailed information for a specific product,” said Chung. “For the good of the global trade industry, I hope my program becomes utilized by exporters not only in Korea, but around the world.”

A recent seminar held at Kotra by Chung was well received as close to 140 exporters showed up on short notice and took interest in Chung’s program.