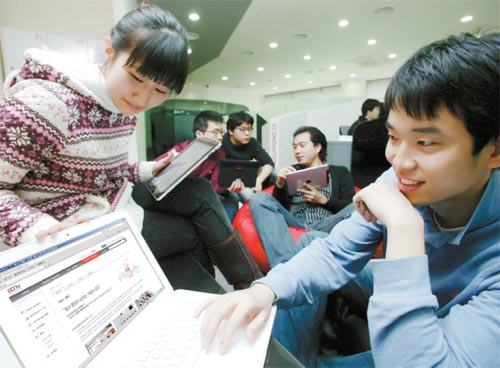 
While numerous mobile content policies get introduced in the midst of the smartphone craze, KT has opened up a support platform for application developers that will help spur along this smartphone era.

At the KT research and development center located in Umyeon-dong, southern Seoul, an opening ceremony for the Econovation Center kicked off this KT’s move.

Choi See-joong, chairman of the Korea Communications Commission; Korea Internet Security Agency CEO; Kim Heung-nam, president of the Electronics and Telecommunications Research Institute; and Lee Suk-chae the CEO of KT, all participated to celebrate the beginning of the mobile application support center.

Covering 330 square meters of area, the center located on the fourth floor of the KT research and development center, Seocho District has rooms dedicated to development projects, testing mobile applications and holding discussions, seminars and educational training sessions. It also has a resting area and a separate room to store its database. In addition, the facility will test Wi-Fi, Wibro and WCDMA as well as servers and other Web hosting services.

Developers will also be able to develop new applications, collect data and test their content on various operating systems.

Along with opening of the Econovation Center, a developers conference hosted by TEDx Myeong-dong and supported by KT was held on the 1st floor of the KT R&D center. This conference is held individually in each region with the license and permission of TED (Technology, Entertainment, Design) a worldwide knowledge sharing network. One-hundred application developers were on hand for TEDx and concentrated on the themes of idea sharing and openness.

Pyo Hyun-myung, president of the mobile business group at KT said: “With the center’s opening, we are better able to support smartphone application developers in Korea. Currently 2,600 developers have registered at the Econovation Center. Through the center, we plan to nurture about 3,000 mobile app developers, make 3,000 new mobile apps and give online and offline educational sessions to 10,000 people per year. Through continuous support we plan to turn the Econovation Center into the hub of high-quality application development.”