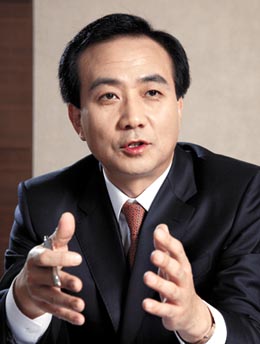 Some say life is all about ups and downs. Perhaps that is especially true in the realm of business.

Park Byeong-yeop, founder and CEO of Pantech Group, has been in both places - at the top of his game and down at the bottom.

Park, 49, made headlines in the early 1990s as a wealthy entrepreneur whose stocks were worth some 400 billion won. But in the mid-2000s, the company hit hard times and had to go through a debt workout program. He gave up his stake in the company but continued to fight to save it.

“The perseverance that got us through all kinds of hardship, plus creativity and innovation - these are the DNA of Pantech people,” Park said at the ceremony marking the 20th anniversary of Pantech on Monday at company headquarters in Sangam-dong, northwestern Seoul.

As he continued his speech, tears welled up in his eyes.

“I am truly grateful to all of you who have done your best until the company reached the age of maturity,” he told workers. “Let’s attain our goal of 10 trillion won in sales by the year 2015 and lay the groundwork for the company so it lasts for 50 years and beyond.”

Park and five other employees founded Pantech in 1991. In just 10 years, the company became a giant with annual sales of 1 trillion won and 2,000 employees.

But things began to turn sour in 2006. Triggered by the explosive success of other handsets, especially Motorola’s Razr, the company saw its profits plunge and the company was forced to enter a debt restructuring program the following year.

Park gave up his stakes in the company and other real estate assets and made it his life’s goal to salvage the company. Through his persistence, he has been able to convert the $70 million debt Pantech owed to Qualcomm, a U.S. mobile technology firm, into equity.

That was just the beginning of Pantech’s comeback. It has managed to stay in the black for 14 straight quarters since the third quarter of 2007. Furthermore, it took advantage of LG’s late entry into the smartphone business and became the No. 2 smartphone maker after Samsung last year.

Its premium smartphone models, Sirius and Vega, sold more than 1 million units in Korea. Its success was the result of the company’s focus on research and development. Since 2007, the company has poured some 700 billion won ($641 million) into R&D.

In March of last year, Pantech’s creditors bestowed Park with stock options totaling 164 million shares as a thank-you for his work. That represents 10 percent of the company shares, and is likely the foothold with which Park will resume ownership of the company.

“The mobile phone industry is a battlefield where you have to fight against gigantic dinosaurs. Just one mistake and you will be eliminated in an instant,” Park said. “Still, if we put in 200 percent in spite of the hardships we can build a bright future, and I will stay at the forefront,” he said.