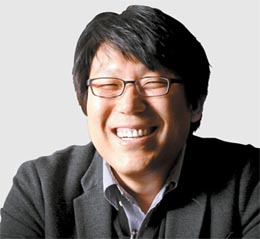 “Twitter swordsman” Park Kyung-chol says, “Never underestimate the public voice on Twitter.” He humbly claims, “I am not a good-looking guy.” But why do so many people look at his lips? He carefully says, “I can’t articulate well and don’t have a good tone for speech.” But then why do so many people fill up the lecture hall to listen to him speak?

The person in spotlight is Park Kyung-chol (Twitter id: chondoc), who is famously known in Korea for his pen name “Sigol Euisa,” or “Rural Doctor.” Many Koreans consider him the speaker of our generation who knows what to say and what should be said about Korean society both online and offline. In fact, he provides more than 350 free public lectures throughout the nation each year, including at middle and high schools.

The 47-year-old started his career as a surgeon in Andong, North Gyeongsang. But in his early days, he wrote several books about stock trading and became a famous figure in the economic world. Park has widened his career to become an economic analyst, columnist, writer and lecturer. He is the host of the KBS 2 Radio program “Park Kyung-chol’s Economic Focus” and the MBN TV program “Park Kyung-chol’s 60 Minutes of Sympathy.”

We asked him about the future of social networking services (SNS), such as Twitter and Facebook, to help people build social relationship with others.


Q. Your survey on Twitter was a hot issue recently. Your question was “What three things should our next leader tackle?” What was the result?

A. I was shocked that thousands of retweets (replies) came in such a short time. It confirmed that people have an enormous desire to express their opinion.

What were the three things that were selected?

I was surprised that the first one was reforming prosecutors. This means the public believes that “justice” in our society is not happening. The public wants to set legal justice straight and punish all unlawful people correctly, whether they are important business figures or politicians. You can never underestimate the public. I hear people complaining, “What is the point of changing the players when there is no referee to watch.”

People would have thought education was the first problem.

The second was real estate and the third was education. As you know, Twitter is a channel that can move people’s hearts in 140 words.

It’s not like threatening someone with a knife, but more like tapping someone’s shoulder to move them. The leaders in our society should know that mass intelligence is surprisingly more powerful than they think.

Can social networking services be the engine for producing unexpected results in the by-elections this month and also general elections next year?

Desperate voices on Twitter say things like, “You guys are not the only ones who can speak, let me talk, too,” and “Please listen to what I am saying.” If this is what’s happening, I think social networking services can be an instrument for societal change.

You do not always talk serious topics on Twitter. Why do you discuss things like late-night snacks?

During the daytime, people might be curious about what I say. But at night, I think it would be better for us to have a comfortable conversation. You know, we all work hard all day, right? So I thought ‘What would be the best topic for 200,000 people to feel relaxed and comfortable with at the same time?’ And I believed that would be love and food. So that is the reason why I normally tweet about a food that I ate for lunch and is less than 10,000 won ($9.20).

Do you think social networking services like Facebook and Twitter can at least in part carry out the function of what traditional media has been doing?

If a person is communicating through a smartphone, we can say that person has social curiosity. It is a thrilling experience for people who have been following an agenda unilaterally fixed by the media to escape from the structure and throw back certain subjects to news producers who have overlooked or avoided them. From my perspective, those who tweet a lot will have a big influence during election time because their political will is solid and they have strong self confidence with active voices.

You have to look into the other side of the debt. The percentage of people who borrow is increasing. Furthermore, the quality of debt is getting worse.

But I am not saying that there is a solution, I just want to place this topic on the agenda so it is discussed in public. There are some people who push me to offer solutions. But why do I have to be the person to provide a solution? My duty is to keep talking about the subject and let others come up with solutions.

How do you want to be remembered by your friends or children?

If I can only hear people say, “Yeah, I miss that man, Park Kyung-chol” after I die, I would be happy knowing I have not lived in vain.