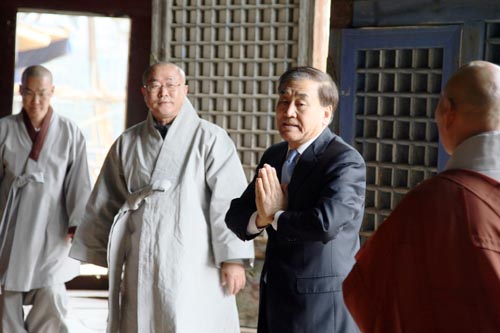 Lee Jae-oh, minister without portfolio and a close confidant of President Lee Myung-bak, put his hands together to pay respect at Jikjisa, a Buddhist temple under the Jogye Order, in Gimcheon, North Gyeongsang. [YONHAP]


In a possible breakthrough to the ruling Grand National Party’s (GNP) efforts to end a standoff with Buddhist circles, the Jogye Order, the largest Buddhist sect in Korea, has allowed a group of party officials to hold a Mass at one of its temples, a GNP official said yesterday.

Several GNP lawmakers who are Buddhists plan to hold the ceremony at Jogye Temple in downtown Seoul on Tuesday, according to the official at the office of GNP Representative Cho Yoon-sun. The official requested anonymity.

It would be the first time that lawmakers participate in a Mass at the temple since the summer of 2008.

“(Lawmakers) felt we should visit Jogye Temple for our ceremony,” the official said. “Representative Cho consulted with other members, such as Representative Cho Byung-gook and Representative Lee In-ki, and asked the Jogye Order about holding our meeting there. They gave us the green light.” Cho leads the group of Buddhist followers within the GNP.

In January this year, the Jogye Order sent a directive to its member temples banning government officials and GNP lawmakers from attending any Buddhist events. The action came after the GNP passed a budget bill in December slashing state aid for temple stay tourism programs from 18.5 billion won ($17 million) in 2010 to 12.2 billion won.

Government officials later explained that there was miscommunication in earmarking the budget and gave assurances that the funding would be reinstated to the former level. But that wasn’t enough to assuage suspicions of religious partiality after President Lee Myung-bak, a Presbyterian, took office in 2008. The Jogye Order also declared it would reject state funding until Lee’s term ends in February 2013.

Officials said 20 to 30 GNP representatives will attend the ceremony and they will issue a resolution on cooperation and harmony before taking their 108 bows.

Officials at the Jogye Order said the ban hasn’t been entirely lifted, though recent signs point to a resolution between the two sides. On March 28, the Venerable Hyechong, head of Dharma Propagation at the sect, attended a service led by a group of Buddhists at the Blue House.

Later last month, the order removed a sign at its headquarters that banned government and ruling party officials. Jogye also sent a directive to its members saying that government officials could visit temples for Buddha’s Birthday on May 10 as long as they made their trips in an individual capacity.

“We haven’t made the final call on (completely lifting the ban on politicians),” an official at the sect said. “We will reach the decision after studying the opinions of our monks and other Buddhists. What (politicians) do isn’t as important as their sincerity.”