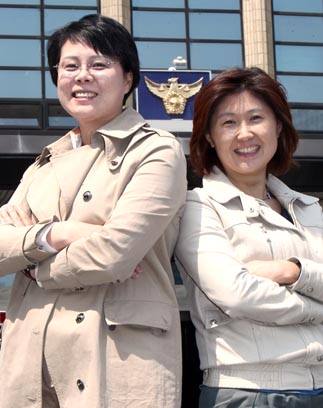 Park Mi-ok, 43, left, and Song Eun-ju, 44, right, were honored as “Top Cops” at the Mapo Police Station’s violent crime unit. The two women, who met in 2004, have been involved in a number of high-profile cases in recent years. By Kang Jung-hyun

Song entered the field in 1998 and since 2009 has been part of a team that investigates organized crime.

Both women are highly skilled at judo and kendo and take boxing classes as well as participate in marathons. They say such hard-core training is necessary to successfully suppress a criminal brandishing a deadly weapon.

Park says the job is exhausting but that it is worth the sacrifice.

“Every time I jump into a new case, I encounter a totally new world I wasn’t aware of. Everything’s new to me, ranging from criminal techniques to diverse professions of criminals,” Park said. “As soon as I’m given a new case, I have to stay up all night for at least a week to investigate suspects and sometimes can’t go home for months. I endure the exhaustion with only one thought in my mind - catching the criminal.”

In 1998, Park joined the search for Sin Chang-won, a thief who had escaped from prison. A nationwide manhunt was carried out, but he evaded capture for over two years. Park and her colleagues crisscrossed the country for eight months that year in a search for Sin.

To create a profile of the criminal, Park studied his prison diary. She said she read it so many times that she had nearly memorized the whole thing. Through series of in-depth interviews with eight of Sin’s former live-in girlfriends, Park analyzed his living habits and finally provided the vital clue to his whereabouts. Thanks to Park’s investigation, police were able to arrest Sin.

Song was also involved in a high-profile case when she investigated notorious serial killer Yoo Young-chul in 2004. On a rainy night that year, Song was digging on a hill where Yoo said he had buried one of the 21 people he had murdered and found the body.

“After digging for a while, I found a corpse, but I wasn’t scared. In fact, I was excited, thinking that this could finally break the case,” Song said.

Park and Song met in 2004 while working on the case of serial killer Chung Nam-gyu and have worked together on numerous cases ever since. The two recently teamed up for the case of a doctor suspected of killing his eight-month pregnant wife in Seoul. They carefully put together the pieces of the puzzle and found enough evidence to have the husband arrested.