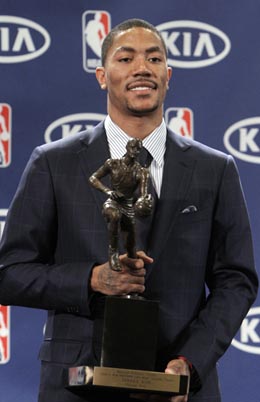 CHICAGO - Derrick Rose was named the NBA Most Valuable Player on Tuesday, becoming at 22 the youngest player to receive the coveted award.

The NBA confirmed the widely expected honor, with which Rose joins legendary Michael Jordan as the only Bulls players to earn MVP honors.

Rose guided the Bulls to the best regular-season record in the league. He was seventh in scoring and 10th in assists - the only player this season in the top 10 in both categories.

Rose is in his third NBA season with the Bulls and will be presented with the award when Chicago host Atlanta in game two of their Eastern Conference second-round playoff series.

“Very proud. He’s earned it,” said Bulls coach Tom Thibodeau. “Thrilled for him. He’s been everything you could ask for in a leader, player, and he’s only going to get better.”

Rose, who honed his skills prior to the season playing for the U.S. team that won the world title in Turkey, raised eyebrows when he said in training camp that he didn’t see why he couldn’t be the league’s MVP.

“It really just came out,” Rose said. “That’s the way I thought at the time. I put a lot of hard work into my game, especially during the summer .?.?. I dedicated my whole summer to basketball. Even though it was tough, I did it.”

Jordan was named league MVP five times, the last time in 1998. Now the owner of the Charlotte Bobcats, Jordan said during the season that Rose deserved the award.

A modest Rose was quick to cut off comparisons to Jordan.

“I’m not even touching that man right there,” Rose said. “I’m far away from him. If anything, it would be great to be close to him. This is a different team, a different era.”

Rose also supplanted Wes Unseld as the youngest MVP. Unseld was 23 when he was named rookie of the year and MVP with the Baltimore Bullets for the 1968-69 season.

At the press conference announcing the prize, Rose choked up as he spoke of his mother, Brenda Rose, and her contribution to his career.

“Just thinking how hard she works,” Rose said, looking at his mother and older brothers in the front row. “Those are hard days. My days shouldn’t be hard because I love what I’m doing. That’s playing basketball. You keep me going every day and I love you.”

The top pick in the 2008 draft and rookie of the year, Rose started the All-Star Game for the first time this year after making the team as a reserve last season. He averaged 25 points, 7.7 assists and 4.1 rebounds.