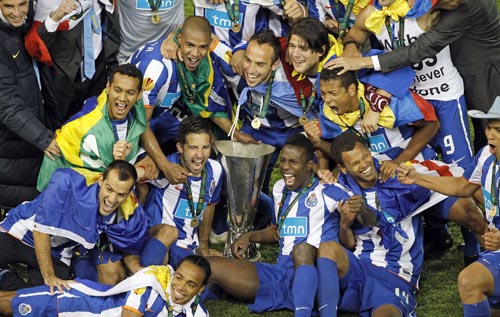 Porto players celebrate with the UEFA Cup after they beat SC Braga in the Europa League final at the Dublin Arena in Dublin, Ireland, on Wednesday. Porto won the match 1-0. [AP/YONHAP]


DUBLIN - FC Porto revived its status as a European power by beating Braga 1-0 Wednesday in an all-Portuguese Europa League final to crown a near-perfect season with the club’s biggest title in seven years.

Radamel Falcao provided the winner in the 44th minute, meeting a perfect cross from the right by Fred Guarin to head into the top left corner of the net after a largely tentative first half.

“It’s so many emotions, it’s hard to explain,’’ Falcao said. “It’s almost like a dream come true. This team is really proud of itself, we’ve worked really hard.’’

The goal was the lone moment of brilliance in a game that featured little in terms of entertainment value, as the heavily favored Porto effectively neutralized Braga’s efforts to fight back.

It was Porto’s first European title since winning the 2004 Champions League under Jose Mourinho and came after an undefeated domestic league season.

With the victory, Porto coach Andre Villas-Boas became the youngest coach to win a European title at just 33 and in his first season in charge of the club. Porto still has a chance to win the Portuguese Cup as well, and the comparisons between Villas-Boas and Mourinho, his former mentor, are only likely to grow.

Braga was playing in its first major European final after ousting Portuguese powerhouse Benfica in the semifinals. The final however developed with predictable inevitability, with Porto the more attacking team from the start while Braga sat back and relied on counterattacks.

Brazilian forward Hulk posed a constant threat with his powerful runs down both flanks and nearly opened the scoring in the seventh minute when he broke into the area from the right and went past two defenders before sending a shot wide of the far post.

Falcao, meanwhile, was largely anonymous before showing his poacher’s instinct to break away from his marker to meet Guarin’s cross and break the deadlock.

“The big secret of this team is that we’re a big family, a family that gets on well,’’ Falcao said.

The goal forced Braga to switch tactics and Paciencia reacted immediately by sending on Kaka and Mossoro after the break. It nearly paid off within a couple of minutes when Mossoro took advantage of a defensive blunder to go one-on-one with Helton, but the goalkeeper reacted well to save the midfielder’s low hard shot with his leg.

Alvaro Pereira had a chance to double the lead in the 71st minute when he ran into the area to meet a lofted cross from Hulk, but couldn’t connect with the ball.

In a last desperate attempt, Braga goalkeeper Artur ran up the field in injury time to meet a free kick into the area but his header was easily scooped up by Helton.

Villas-Boas will now enter next season with realistic hopes of equaling Mourinho’s feat of following up the team’s victory in the 2003 UEFA Cup, with the Champions League title the following year.