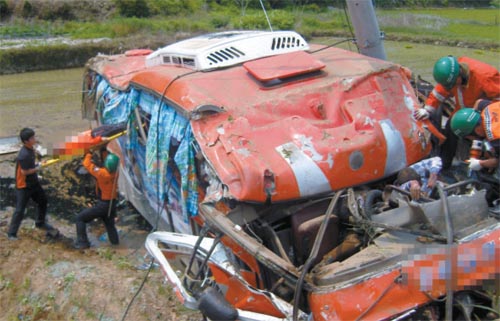 Rescue workers attempt to enter a tourist bus that was badly damaged in a traffic accident that killed two people and injured 44 others. The bus drove off a road in South Gyeongsang after hitting several passenger vehicles, police said yesterday. The bus was returning from a tour to the nearby fishing village of Namhae, 495 kilometers (307 miles) southeast of Seoul, when its driver lost control and hit passenger vehicles headed in the opposite direction. [YONHAP]