With Samans at helm, GGGI sees its calling

With Samans at helm, GGGI sees its calling 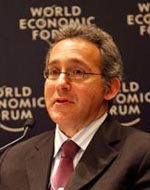 Richard Samans, executive director of the Global Green Growth Institute, was dressed appropriately for his job, wearing a green suit and tie.

Since taking the helm of the Seoul-based international organization founded last year by President Lee Myung-bak, Samans has overseen the GGGI’s transition from a local NGO into what he hopes will be an international player.

His excitement seemed palpable during an interview with the Korea JoongAng Daily on the second day of the Global Green Growth Summit, which was held at the Lotte Hotel in central Seoul early last week.

As the role of the GGGI expands, Samans said more countries will see the advantages of pursuing economic development in a more sustainable way. Before joining the GGGI early this year, Samans served as managing director of the World Economic Forum as well as holding various positions in the U.S. government, the private sector and research institutions.

A. We’re a new organization - we just celebrated our first year and had an important board meeting last weekend. The objective of the GGGI is to, in effect, change the way we organize economic growth in societies and to try to integrate in a much more careful and deliberate fashion and drive our environmental objectives into economic growth and planning.

It’s a very ambitious ambition, but it’s one that is absolutely necessary for the future of the planet and for our children and their children. Because of the current rates of resource depletion and pollution, we’re going to substantially alter the environment in which we’re living, which will decrease [future generation’s] quality of life.

So it’s very important for this generation to think through how we’re going to change the way we organize our economic activity. That’s the basic mission of the organization.

What is the core message from last week’s Global Green Growth Summit?

The core message of this summit is that there’s something new and very important going on in the world. That is an increasing recognition that, in fact, we do need to transform the nature of economic growth. And that’s what we call green growth.

And what I think is important for people to understand particularly in Korea is that there is a lot of excitement in the world and they are trying to get a better understanding of what Korea has been doing because Korea is one of the most advanced examples in the world of a country that is thinking seriously about transforming its economic development path in a way that is more sustainable.

President Lee, a couple of years ago, undertook a very ambitious and serious initiative to drive a new paradigm of economic planning and development throughout different parts of the government. And that is a model that has evoked a lot of interest around the world.

So people are here to talk about what they are doing in their countries, to learn more about what Korea has been doing, to learn more about GGGI, which is a new international organization that is devoted to trying to create a dynamic of experimentation - of the type we see here in Korea but among many countries in the world - to effectively innovate together a new model of economic growth.

You were offered a position in President Barack Obama’s administration. Why did you refuse the offer and join GGGI instead?

I had been in discussions earlier with the Obama administration and had been exploring options with them, but that was a bit earlier actually than this. So it’s not exactly a related story. Although the facts are right, they’re not linked in the same sequence here.

The point is that like anyone in the prime of their career, they have different options and I had a very good job as managing director of the World Economic Forum.

However, the vision that President Lee and the board of directors and Chairman Han Seung-soo [former prime minister] have created in the GGGI is so important, I think, for the future of economic policy, which is my field, for international governance [and] for international cooperation more widely.

Even though it’s a small and new organization, I believe that if this were done properly it can make an enormous difference. And therefore, I was compelled to come here and try to add my energies and whatever skills and talents I can bring to help it succeed.

What are some of the institution’s accomplishments over the past year since its establishment?

We’ve been in a building mode, so in the last several months we have diversified [our] partner countries.

It was Korea who took the initial step to create the institution and provide initial funding, but since then countries like Denmark, Japan, the United Arab Emirates, Australia and, soon, a couple of additional countries have agreed to partner to provide multiyear funding. So that’s very important indication that our strategy to internationalize what is now a Korean nonprofit foundation into an international organization is proceeding well.

Some consumers may not be aware about green growth. How should they prepare for the green growth era?

What many people don’t realize is that they can contribute very significantly in few ways. One is that energy efficiency is something that all of us are engaged in whether we’re a giant chaebol or an individual household.

Frankly, the best climate mitigation option that’s available is simply energy efficiency. And usually it pays for itself over a number of years. So what consumers need to understand is that when they go out and buy what we call “white goods” - refrigerators, washing machines lighting fixtures - they should realize that the actual cost of that piece of equipment is not just the price tag that you see on the appliance.

Many students are interested in working for international organizations. Do you have any plans to recruit Korean students in the future as GGGI becomes bigger and needs more staff? If so, what kind of talents are you looking for?

We have already recruited quite a number of Korean nationals in the organization. Just this summer, we have created our first summer internship program in which we’re taking mainly Korean graduate students and involving them during the summer in some of our works.

And as we grow, and since our Seoul office is our global headquarters, there is no question there will be additional employment opportunities for a range of Korean people with different skill sets.

What’s the best way to apply for that work? We’re looking for skilled people who can help do a lot of the economic analysis that’s required to support countries as they’re developing their green growth economic development plans. We hope to build a truly global culture where we have a blend of nationalities. We opened our first overseas office already in Copenhagen and will do so in Abu Dhabi and later on in the year in London.