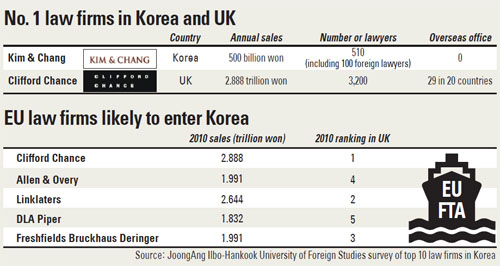 Korean lawyers and experts said unprecedented changes will take place when foreign firms start operating in domestic markets. While many are concerned about their future, others see new opportunities in the globalized era.

The immediate reaction is fear over competition in the market, which has been exclusive to Korean firms. Some see a looming invasion. “It’s like having Western fleets in the waters off Incheon [wanting to land in Korea],” said Kwon Oh-chang, a lawyer with Korea’s largest law firm, Kim & Chang. “In five years, at least three or four of the top 10 law firms here will be merged with foreign firms.”

Lee Hoo-dong, a lawyer with Bae, Kim & Lee LLC, agreed. “Japan opened up its legal services market, and the sixth largest law firm just disappeared. We are no exception from such a situation.”

Under the trade deal, the legal service market will be opened up in three gradual steps. The first step took place on July 1 when the FTA allowed EU law firms to open offices in Korea. The second step will happen on July 1, 2013, when EU and Korean law firms will be allowed to jointly handle cases and share profits. And in the third step, starting July 1, 2016, EU law firms will be allowed to form joint ventures with Korean partners and hire Korean lawyers, possibly triggering an exodus of talented human resources from their local employers.

“An exodus is a possibility we worry about when the market is fully open,” said a lawyer from the country’s largest law firm.

According to the survey, Korean firms are particularly concerned about the largest British law firms, as well as the European branch offices of U.S. law firms. Nine of the 10 Korean law firms that participated in the survey said the threats will likely come from the world’s largest law firms, such as Britain’s Clifford Chance and Allen & Overy.

While Korea’s legal service market is worth about 2 trillion won ($1.8 billion) per year, Clifford Chance alone recorded nearly 2.89 trillion won in sales in 2010.

And European firms do not hide their interest in the Korean legal service market.

The Law Society of England and Wales hosted an international exchange gathering on June 23. Lawyers from Korea, China and Hong Kong took part in the three-day meeting, and the opening of the Korean market was the most hotly discussed topic.

“I can sense that the time has come to find [European] partners,” said Son Do-il, a partner at Hwang Mok Park, after attending the event.

In an interview with the JoongAng Ilbo, DLA Piper, a global law firm, revealed its ambition. The world’s third largest law firm has 4,200 lawyers in 76 offices in 30 countries. The firm’s U.K. and U.S. offices recorded $2 billion a year in total sales.

“We will form a team of about 10 people before the end of this year [to enter the Korean market],” said Michael Kim, a partner at DLA Piper. “Daniel Lee from our Tokyo office will head the team.”

Kim said the Korean market is lucrative and attractive enough for his company to enter. The strategy is to first take foreign firms’ cases in Korea to cover expenses and explore Korean firms’ cases abroad to earn profit, he said. The firm is also open to taking over a Korean firm, he said. If that were to be the case, the preference lies among the top five firms, he said.

DLA Piper is not alone.

Allen & Over said Korea is an attractive market with growth potential, adding that if it decides to enter the Korean market, the British law firm will focus on advising Korean firms on overseas investments.
According to industry sources, Clifford Chance has already begun searching for office space in Seoul.

Another British law firm, Eversheds, said it is ready. The firm, specializing in maritime, logistics and insurance industries, said it has refurbished its Korea team and recruited Korean lawyers. Ronald Sum, a partner of the firm’s Hong Kong branch, said he feels the pressure to grasp the Korean market early on. Sum said the firm will open an office in Korea as soon as possible.

Korea’s dynamic and stable economy makes it one of the most attractive markets in Asia, Sum said. Europe’s growing investments in Asia and Korea’s export-driven economy are also appealing points, he said.

Sum predicted that the competition will grow fierce in five years, when European firms will be allowed to hire Korean lawyers. Clients, however, will be guaranteed high quality legal service with a wide range of price tags, he said, adding that the legal service market’s opening will also provide Korean law firms an opportunity to enter the global market. Local firms in Hong Kong became globally competitive after the market opened, Sum said.

As European firms brace to enter the market, Korean firms have grown more and more restless. Experts and lawyers said Korean firms lack expertise in large international deals, in particular to compete against European giants, who have decades of legal service history.

They pointed to Korea National Oil Corporation’s September 2010 takeover of the Scottish company Dana Petroleum as a classic example of foreign firms’ dominance.

According to the JoongAng Ilbo’s survey, the top 10 Korean law firms admitted they were weak in energy deals, mergers and acquisitions and corporate finance cases. And yet, the fields are some of the most lucrative in the fast-growing markets, they noted.

The competitiveness, however, is not enough, said Choi Chung-hwan, a director in charge of international relations at the Korean Bar Association.

“The law firms cannot just hold on to litigation and advisory roles in the domestic market,” he said. “Korean conglomerates such as Samsung Group and Hyundai Motor Group will turn to foreign law firms for their overseas businesses, and that will be a crisis.”

Choi appeared to have enough grounds to be worried because Korea has suffered from a serious imbalance in international payments in legal services.

According to Choi, a more serious problem will be the chain reaction in the domestic market when foreign law firms take away legal services for Korean conglomerates’ overseas operations.

“Then, large Korean law firms will turn their eyes to domestic litigation,” Choi said. “Then, it will create a domino effect against small law firms and private attorneys.”

Other lawyers agree with Choi’s concern.

“When a super supermarket opens business in a neighborhood, mom-and-pop stores face a crisis,” a partner of a major Korean law firm said. “Just like that, large law firms will [take over] cases that were normally handled by small law firms. Then, eventually, private attorneys will have to close down their businesses.”

In a means to survival, some Korean law firms are seeking to establish partnerships with European law firms.

Among the 10 law firms surveyed by the JoongAng Ilbo and the Hankuk University of Foreign Studies, five said they are willing to jointly handle cases with European firms and share profits.

Such a trend is stronger for smaller law firms.