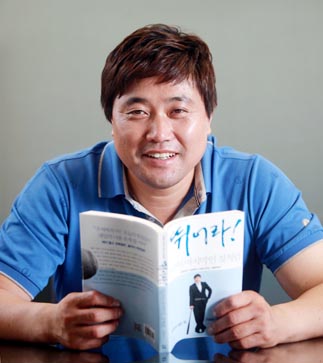 Many athletes are glorified as gods, but not many are given a nickname to match. Enter former Samsung Lions slugger Yang Jun-hyuk. His nickname in Korean, “Yangsin,” is actually a combination of his last name with the word “sin,” which means “god.”

And in his case, the nickname appears well earned. The 42-year-old has topped almost every career batting category in Korea Baseball Organization history. Yang is the all-time leader in most games played (2,131), hits (2,318), home runs (351), RBI (1,389), runs (1,229) and walks (1,278). He also dominates other batting categories except stolen bases and is tied for first with the most batting titles (four) in KBO history.

But in a recent interview, Yang said he doesn’t want recognition for the records he has set. Instead, the lefty hitter wants to be remembered as “a player who always sprinted to first base,” the position he played throughout his 18-year career. He also hopes to be known as a team player and a baseball enthusiast.

Yang started playing baseball when he was in fourth grade at Namdo Elementary School in Daegu. After graduating from Yeungnam University and playing with the Sangmu team during his mandatory military service, Yang signed with his hometown KBO club, the Samsung Lions, in 1993 and his career took off.

But in 1999, with his teammate Lee Seung-yeop rising as the team’s top batter, Yang was traded to the Haitai Tigers (now the Kia Tigers) along with two other players in a deal for closer Lim Chang-yong.

Feeling shocked and betrayed, Yang initially bad-mouthed the deal and said he would play in the United States. Later, however, he had a change of heart and decided to play for the Gwangju-based team after apologizing to Tigers manager Kim Eung-ryong.

But Yang’s experience motivated him to take an active role in protecting players’ rights and at the start of the 2000 season he established the Korea Professional Baseball Players Association. That didn’t sit well with the Tigers’ management and Yang was again traded at the end of the season, this time to the LG Twins.

With his new team, he captured his fourth batting title in 2001 before becoming a free agent.

In 2002, he returned to the Lions with the help of his old manager, Kim - who was now with the Lions. Although Yang failed to hit .300 that year, he and the team took home something better - the Korean Series title.

The team won its second Korean Series title in 2005, the year they also got a new manager, Sun Dong-yeol. But the victory signaled the beginning of the end of Yang’s career. With the arrival of Sun, Yang began to lose his status as the team’s star as Sun tried to inject the club with young talent. The team held on to Yang for a few more years, but on Sept. 19 last year, Yang announced his retirement from baseball.

At his final game against the SK Wyverns, Yang didn’t get any hits, but as always, he ran to first base as fast as he could and said a tearful goodbye to fans.

These days, Yang is still in the game, working to promote baseball and get people involved in the sport.

His ideas about baseball are contained in his first book, “Run Like It’s Your Last Chance,” published last week by JoongAng Books.

Yang is also interested in fostering young people’s development through baseball and last month launched an organization that aims to do just that. The organization sponsors scholarships, baseball camps and charity games, among other activities.

Yang spends most of his days as a baseball commentator for SBS, but is also a popular public speaker and honorary ambassador for several organizations. He’s in the cast of the “What Makes a Man” segment of KBS’ “Happy Sunday” variety show.

Last Monday, the Korea JoongAng Daily sat down with Yang at his office in Yangjae-dong, southern Seoul, to talk about life after retirement and his future plans. 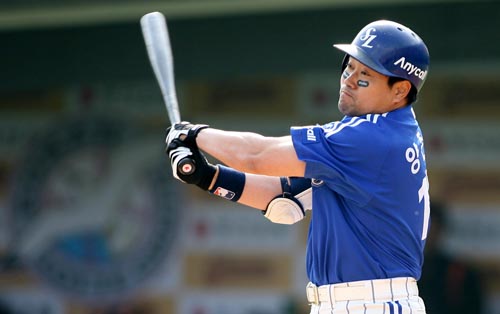 Q. You have a number of jobs. Which is the most comfortable?

A. Nothing is easy. Some people may think that being a commentator is easy, but it’s actually not because I have to offer my analysis. I’m still learning.

Do you think you’ll stick with it?

It’s definitely not my ultimate job. Someday I hope to return to the field, either as an administrator or coach. I haven’t finalized my future plans, but I’m currently focusing more on my baseball organization.

What made you start the organization?

Kids are so trapped at school and there is no creativity or fun.

Some people say that baseball is a microcosm of life and I would agree. I think baseball can teach life lessons. I want to teach kids teamwork, enjoyment and other values through baseball. That’s something schools can’t offer.

What is your new book about?

I want to deliver a message to young people who fear failure. They should always challenge themselves and aim high. But they need to experience failure sometimes because they can learn from it. You need to always face the problem and tackle it head on.

Are you planning to write other books?

If I have the chance I will. I’d like to write another book for teenagers.

In the book, you say that you don’t want to be recognized for the records you’ve set. Why?

I never lived to set records. I just played every day, headed for first base and the records followed. With the Lions, I played with Lee Seung-yeop, one of the greatest hitters in baseball, and I played a supporting role for him. For me, tomorrow comes with putting in my best effort in today.

Which record do you wish you achieved and of which one do you feel most proud?

I wanted 2,500 hits, but I didn’t want to pressure the team in order to get the record. As for the record I’m proud of, I’d say base-on-balls plus hit-by-pitch (1,380), which is clearly related to teamwork. It shows that I was patient enough to give my team the best chance.

You received an offer from the New York Mets in 2001 but didn’t take it. What stopped you?

I wasn’t worried about going overseas, but coming back to the KBO was a concern since I had been branded as the man who had founded the players’ association. I know that was an opportunity I missed, but I was worried that KBO clubs wouldn’t sign me if I failed and had to return to Korea.

You also missed out on a chance to play for the national team that ultimately played in the Olympics and the World Baseball Classic. What happened?

I wanted to play for the national team, but I didn’t know what I could do if the organization wasn’t going to pick me up. In fact, because of the players’ association issue, I was almost buried in the baseball scene.

What qualities should a good batter have?

You always have to evolve. Back when I was a rookie, there were only three types of pitches - the fastball, the curve and the slider. But now pitchers throw a wide variety of pitches. To adjust to and overcome them, you can’t stay at the same level and relax.

What qualities do think batters lack these days?

They have better technique, but they don’t have the stamina of older players. As for mentality, young players lack endurance and will power. When they face difficulty, most of them give up easily.

Who do you think will succeed you?

Lions batter Choi Hyung-woo is doing well and I actually gave him some advice when I retired. As for batters outside the Lions, I think Kim Hyun-soo of the Doosan Bears deserves mention.

What do you think about your nickname?

It’s too much for me. I wanted a more friendly nickname because it’s so awkward for me to think of myself as a god. It’s a good nickname, but it doesn’t make for a good mascot. (Laughs.)

Any final words for your fans?

I just want fans to love baseball more. In the past, baseball was just about watching the game, but now people can play it on their own. Baseball actually offers much more than meets the eye and it’s actually a good metaphor for life.