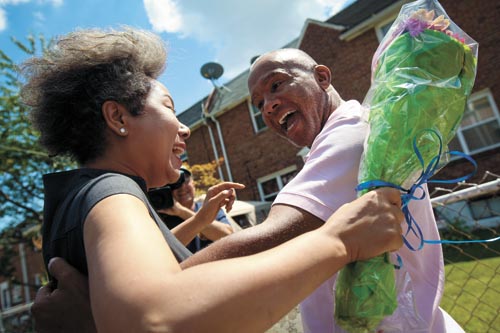 Ronald Lewis, right, is reunited on July 16 with his friend, Insooni, in front of his home in Wilmington, Delaware. Lewis befriended Insooni in a poor Korean town when he was stationed there decades ago in the U.S. Army. Insooni has become one of Korea’s biggest pop stars. [AP/YONHAP]


In 1972, Ronald Lewis, a U.S. Army soldier stationed in Korea, befriended a lonely 15-year-old girl he often saw sitting outside alone, shunned for being a mixed-race child. Her name was Kim In-soon, and she told him she wanted to become a nurse.

They lost touch a few years after Lewis left Korea in 1973.

When the two reunited after 38 years at Lewis’ home in Wilmington, Delaware, last Saturday, Lewis was greeted by a famous Korean pop star who has recorded 17 albums over an illustrious 33-year career. Today, she is better known as Insooni.

“Knowing that she made it, she didn’t have to go out on the street, that’s really a joy in my life,” Lewis told Delaware Online.

Insooni said, “He never knew I became successful in Korea. I wanted to tell him, ‘Don’t worry, I’m successful now.’ So I found him.”

The R&B singer was in the United States on a concert tour. Last year, she held a concert at New York’s Carnegie Hall.

After a long, tearful hug, the two exchanged gifts laced with personal history and symbolism.

Lewis, 58, handed Insooni, 54, a childhood photo album of her he had promised to return when the two met again.

Insooni gave Lewis a statue of seven ducks with the inscription, “Without you, I’m nothing.” One of the ducks is on top of a wave pulling up another duck. The duck being raised represents Insooni, her younger sister Kimberly Hysaw explained, and the duck helping it up is Lewis. The five ducks below lifting Insooni depict family and fans.

Lewis said he has dreamt of Insooni a few times a year. Insooni said she never forgot his eyes.

Born to a Korean mother and a black U.S. soldier, Insooni was bullied as a child for being biracial and left school.

In 1972, Lewis, then a 19-year-old serving in the U.S. Army 2nd Infantry Division in Dongducheon, Gyeonggi, developed a friendship with Insooni. He pooled money with other soldiers to buy her clothes, earrings and food. Insooni said he was like an older brother to her.

After Lewis returned to the United States a year later, they exchanged letters for a few years until they lost touch. Then, a few months ago, they reconnected through a general who contacted Lewis on Facebook to tell him someone in Korea was looking for him.

Lewis works as a technician for DuPont Co. and Insooni has enjoyed a prolific career as a singer since her breakthrough with the now-defunct group Hee Sisters in 1978.

The singer performed “Amazing Grace” for Lewis and a crowd of family, friends and neighbors. The following day, Lewis attended Insooni’s dinner show at the Sheraton Meadowlands Hotel in East Rutherford, New Jersey.

Insooni said she plans to invite Lewis to Korea and will visit him each time she visits the United States. She described their reunion as a “miracle.”