For these doctors, giving their hearts to those in need

For these doctors, giving their hearts to those in need 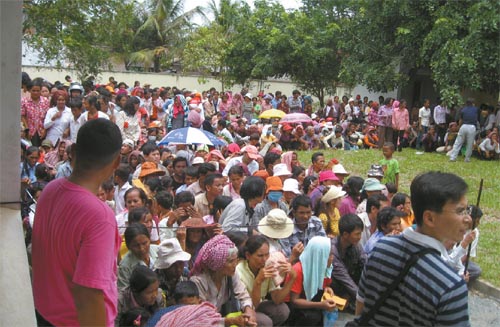 Hundreds of Cambodians wait in line to receive medical care from Korean doctors, who went on an annual volunteer trip last year to Kampong Speu, Cambodia. Members of the KCSC are scheduled to leave on Aug. 8 for this year’s weeklong trip. Provided by the KCSC

Loeng Sonisa, who hails from a small Cambodian village, was one of three children invited to the hospital to receive free life-saving operations.

The three children - Loeng Sonisa, 7; Run Sokry, 9; and Taing Guuochly, 9 - all suffer from ventricular septal defect, or holes in the wall that separates the right and left ventricles of the heart.

Since 2002, the nonprofit Korean Community for Service in Cambodia (KCSC) has sponsored three children with heart diseases each year to come to Korea and receive treatment at SCHU Hospital.

Comprised of SCHU Hospital staff and members of Bucheon Jeil Church, which is adjacent to the hospital, the KCSC aims to provide free medical care to Cambodians in poverty, including annual summer trips to Cambodia’s neediest regions.

The organization was started in the summer of 2002 after a group of doctors from SCHU Hospital visited Cambodia for volunteer work, not knowing then that the trip would become an annual event. Realizing the lack of modern medical care in the country, the KCSC was formed to help more than just a few people each year.

Among the doctors on the 2002 trip was Shin Won-han, director of SCHU Hospital in Bucheon, who credits the support of Seo Kyo-il, executive director of Soon Chun Hyang University, for the KCSC’s long-running success. Seo’s father was the founder of the university.

Shin recalled Seo telling doctors after the KCSC’s establishment, “In 1954, when the Korean War just ended, Korea’s medical standards were terrible. But a medical staff from the University of Minnesota visited Seoul National University at that time. Thanks to them, Korea was able to learn advanced medical techniques.”

Shin said, “That’s why Korean doctors should be the ones who help those people in developing countries like Cambodia and train doctors in advanced medical technology in these countries.”

Every August, around 20 medical staff from SCHU Hospital and members of the KCSC give up their weeklong summer vacation to treat the neediest Cambodians. Last year, a total of 26 KCSC members went to Kampong Speu Referral Hospital, a provincial hospital in Kampong Speu, Cambodia, and treated a total of 3,523 Cambodian patients and performed surgery on 60 more patients over six days.

Lee Gi-cheol, 45, chief of a dental hospital in SCHU Hospital, has never missed a trip for the past decade, saying that the annual trip to Cambodia is “part of his life.”

“Although sometimes we, the doctors, think of this trip as an extension of what we do every day, for the Cambodians who we meet, they wait for a year to see us,” said Lee. “I also believe this trip is a good opportunity for doctors in Korea to realize how lucky we are in Korea and feel compassion toward the people in Cambodia, who die every day due to lack of medical care.”

The KCSC also invites six Cambodian doctors every year to the SCHU Hospital for yearlong training. So far, a total of 43 Cambodian doctors in various departments - including general surgery, obstetrics, urology and anesthesiology - have come.

“I am learning a lot at SCHU Hospital right now,” said Chhor Kompeak, 27, a Cambodian anesthesiologist training at the hospital who arrived in early July. “I want to take the experience that I have here to Cambodia and treat the people in my country.”

Chhor Kompeak said that medical technology in Cambodia is not as advanced as in Korea so only a limited number of doctors can perform delicate operations.

“Cambodian doctors have a lot of knowledge but they rarely have the chance to watch and learn the techniques like I am doing right now in Korea,” said Chhor Kompeak.

“After a year of training, I think I will have watched diverse operations, and I want to train other doctors in Cambodia who don’t have the chance to go abroad to have such experiences.”

Shin, the KCSC director, explained that Cambodia not only lacks doctors but also facilities for doctors to receive proper training.

According to Shin, there are only 2,000 doctors in Cambodia, which has a population of 12 million, meaning that there are 6,000 people per doctor. In contrast, in Korea, there is one doctor per 600 people.

“Cambodia’s economy will gradually develop and medical facilities will also improve,” said Shin. “But improvement in medical practices cannot be achieved in a day or two. That’s why training Cambodian doctors is crucial.”

KCSC members are preparing to go on their 11th trip to Cambodia in two weeks.

And Lee, the dentist, has the date circled on his calendar.

“I feel great to be able to participate in such a meaningful journey for over a decade, but my wife and kids complain sometimes because I haven’t spent my summer vacation with my family for ten years,” said Lee, chuckling.

“I may have to skip next year to calm my wife down.”