A frustrated Phelps looks ahead to 2012

A frustrated Phelps looks ahead to 2012 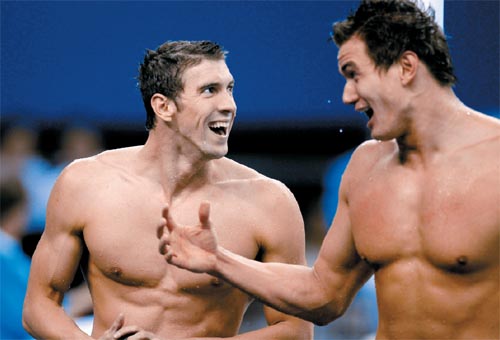 
SHANGHAI - Most swimmers would be content with four World Championship gold medals in a career, yet Michael Phelps left Shanghai with four from the meeting frustrated and warning he would only get better.

The 26-year-old American has now won 26 gold medals in a World Championships career that began in Fukuoka, Japan, a decade ago.

Time, however, is running down on arguably the greatest swimming career ever seen.

Phelps, the most successful Olympian of all time, who won an unprecedented eight golds in Beijing in 2008, has said he will retire after the London Olympics next year.

The Shanghai event, he said, would be the first step in his preparations for those Games.

A bronze in the men’s 4x100-meter freestyle relay and silvers behind compatriot Ryan Lochte in the 200 freestyle and 200 individual medley as well as defeats in the 200 butterfly, his signature event, in the lead-up to Shanghai have left him facing 12 months of tough preparation under coach Bob Bowman.

Phelps has admitted he hates losing and that the only person he was hurting by not training was himself. The losses in Shanghai have stung his pride.

“I have been able to gather more motivation here and I think that’s going to be something that would help me get into better shape for next year,” Phelps told reporters at the end of the championships on Sunday.

“That’s what I need to do. I said this a hundred times this week and I will say it a hundred more, you know to swim fast you have got to be in good shape.

“Ryan is clearly working on it; he is clearly in the best shape, and that’s why he was swimming the hell out of it.

“I just need to get back to what I did, that’s how it works, not giving up and that’s really the biggest thing for me in the next 12 months.”

Despite being frustrated, Phelps’ victories in the 100 and 200 butterfly would at least give him a confidence boost.

However, it was his times across all seven of his finals that may be of greater significance and, after acknowledging that he had on occasions done the bare minimum in training since Beijing, underlined what a freakishly good swimmer he is.

Swimming the lead-off for the U.S. men’s 4x100 freestyle team, he posted 48.08 seconds - which only an explosive 47.49 seconds by 100 freestyle specialist James Magnussen of Australia beat.

Put into perspective, Magnussen’s time is the fastest in the 100 freestyle since polyurethane swimsuits were banned on Jan. 1, 2010. Cesar Cielo’s world record stands at 46.91.

In the 200 individual medley final, Lochte had to break his own world record to win the race. Lochte clocked 1:54.00, 0.10 faster than the world record he set in Rome.

In Shanghai, Phelps clocked 1:54.16 and said afterwards that he had felt whoever won the race would have to break the record.

Phelps was pipped again by Lochte for the 200 freestyle title, but his split times show where he can improve.

Lochte seized control of the race on the third length, swimming it almost a second faster than Phelps and then managed to just hold off his fast-finishing compatriot.

The performances undoubtedly brought a smile to the lips of Bowman, who has coached Phelps since he was a child, and he was adamant the 12 months he had remaining before London should be enough time to prepare their final Olympics assault.

“Apparently it’s more than enough, yeah, it should be plenty,” he said.

“In my mind, he is swimming as well as he can possibly swim here. I am not sure how he can swim better.”