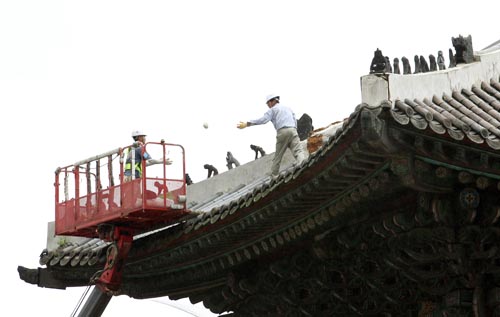 Maintenance workers repair Dongdaemun’s damaged roof ridge on Tuesday. According to the Jongno District Office, the second-floor roof ridge was chipped off by last week’s torrential rain, but no immediate repairs were possible because of the continued downpours. Dongdaemun was built in 1369. [YONHAP]


Among the victims of the recent torrential downpours was one of Seoul’s most historic treasures, Heunginjimun (Dongdaemun), the famed eastern gate that is designated as Treasure No. 1.

A one-meter portion of the structure’s second-floor roof ridge chipped off last week during the heavy rains after water seeped into cracks on the roof, the Jongno District Office told the Korea JoongAng Daily yesterday.

The district said it dispatched four workers for emergency repairs after a passerby in a car saw and reported the damage. Repairmen placed vinyl over the section to prevent further damage from the rain, the office said.

“We were aware of little cracks in the roof, but we couldn’t fix them due to recent torrential rain,” said Lee Sung-ho, a Jongno official. “We will try to restore it when the rain stops.”

However, the district office has found itself in hot water over its poor management of the historic gate.

The Cultural Heritage Administration, which manages the country’s cultural assets, said it wasn’t informed of the damage until Monday.

“The district office is responsible of reporting to higher authorities about any status of their assets in the district,” an administration spokesman said. “But we didn’t hear anything from them about it. I think the Jongno District Office didn’t report it because it considered it minor damage.”

“The Jongno office said that it found the damage on July 29, but we saw debris on the ground until Monday,” Hwang Pyeong-woo, the chairman of the institute, said. “It is ridiculous that a citizen found the damage because there are always two patrols around Dongdaemun who are supposed to take care of it.”

The district office said that the damage and debris were hard to detect by patrols because the damaged portion is located too high to be seen from the ground. Jongno officials also said that they have already asked the Cultural Heritage Administration for more thorough inspections of Dongdaemun and funds for restoration.

Dongdaemun was built in 1369 during the reign of King Taejo of the Joseon Dynasty and was classified as Treasure No. 1 in 1963.