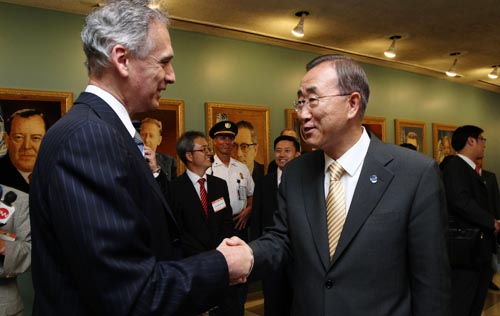 The exhibition, co-organized by the United Nations and Yonhap News Agency, is aimed at raising public understanding of the UN Millennium Development Goals (MDGs) to reduce poverty, hunger and illiteracy around the globe as well as promote human rights, sustainable development and gender equality.

“These winning images have universal value. They communicate immediately and equally to all people,” UN Secretary General Ban Ki-moon said in his opening speech at a tape-cutting ceremony in the lobby of the UN Visitors Center.

The photos shed light on the plight and agony of people stricken with hunger, poverty and disease, Ban said, calling it “the power of photojournalism.”

“I was also inspired by the people behind the lens .?.?. the courageous photographers who risked their own safety in order to tell the world these compelling stories,” he said.

Korea’s ambassador to the UN, Kim Sook, also emphasized the significance of the MDGs, initiated 11 years ago.

“It is our own responsibility to constantly remind ourselves of the need to not only mitigate, but to eventually extinguish the root causes of human suffering. In this regard, today’s exhibition - specifically dedicated to the advancement of the MDGs - is an excellent opportunity for us to recall what the United Nations truly stands for,” he said in a speech at the opening ceremony.

Park Jung-chan, president and CEO of Yonhap, also noted the power of photojournalism.

“Humankind has been trying to live well together in a better environment. The UN is playing a role in drawing together the collective efforts of the international community to address common problems of mankind,” he said. “Photojournalism can help the UN fulfill this important role, as a press photo is powerful enough to make the world different.”

Other attendees included Kiyotaka Akasaka, UN undersecretary general for communications and public information, Tom Curley, president and CEO of the Associated Press, along with top diplomats from more than 30 nations and some Korean business leaders in the United States.

A total of 34 photographs selected from 5,536 entries will be on display until Sept. 8.

Emilio Morenatti with the AP won the contest’s top prize with “Cholera Victims,” a collection of 10 photos depicting the plight of cholera victims in Haiti last year.

The photos also will be on display in Korea’s major cities until Sept. 30. The local exhibition kicked off Aug. 10 in Seoul.

The photos are posted on the official Web site, www.yippa.net, as well.

Yonhap plans to donate all profits from the event to the UN for its disaster relief works and campaign for antipoverty and environmental protection.