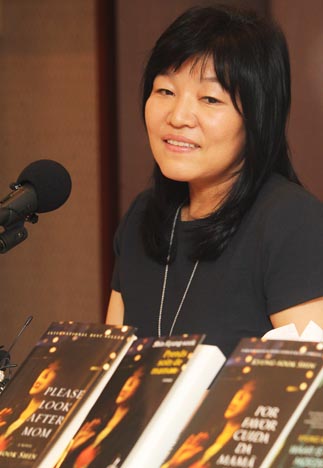 After a year in New York, Shin Kyung-sook, author of “Please Look After Mom,” returned home and summed up what it was like promoting her blockbuster hit novel abroad.

“Writers say their works are like their children, but ‘Please Look After Mom’ makes me feel like I am its child,” said Shin, 48, with a laugh at a press conference on Aug. 28 at the Seoul Press Center.

“Translation is like travel. It becomes translated through decent translators into other languages and travels those countries. I also came back from my trip with books that have been translated into new languages.”

Released in English on April 5, “Please Look After Mom” has subsequently become a worldwide sensation. On Amazon.com, it was selected as an “Editor’s Best 10.” The rights to translation have been sold to 28 countries, and the novel has been published in 15 countries. It was second on Israel’s best-seller list in only four weeks and third on Taiwan’s.

Along with its overseas records, “Please Look After Mom” regained momentum in Korea, increasing its domestic sales to over 1.8 million. Shin’s most recent novel, “From Somewhere Afar the Phone Keeps Ringing for Me” (2010), has also sold its publication rights to six countries.

After the publication of her novel’s translation, Shin toured over seven cities in the United States and eight cities in Europe to meet her readers. The following are excerpts from Monday’s press conference.


Q. How were the readers in other countries?

A. This novel is the story of a family that suddenly loses its mother, who is the person the family feels closest to. It seemed like readers sympathized the loss of family. One reader in the United States who was my father’s age brought 27 copies for his book club members and asked for my autograph saying the father in the story resembles himself. Also, a Spanish reader told me a heartbreaking story about how her mom passed away before they could bury the hatchet. One Canadian reporter even cried during the interview saying that the book reminded her of her mother.

How did you feel about the reaction in other countries to Korean literature?

England and the United States especially considered it fresh. It seemed like they were feeling the power of epic stories in Korean literature. They were looking for hope in humanity or a sense of community spirit that they don’t really have in their own countries. They had a lot of questions about young writers in Korea. So, in my own way, I spoke about Korean literature and the books that I hope will be translated.

Do you see the global potential of Korean literature?

When I was working at Columbia University in the United States as a visiting scholar, one of the professors there told me that Korean literature that could be used in class has increased in the past 10 years. I think we are bearing fruit now. A lot of people talk pessimistically about Korean literature in Korea, but I realized that Korean literature is rather powerful and dynamic. It is obvious that if the book meets the right translator and transfers the original story thoroughly, it will eventually show its power.

Will this trip influence your next book?

A translator who I was with in Norway was Korean who was adopted at the age of five. I was talking about my book, and I was especially careful because the story was about a mother. However, as if she sensed it, she said, “The mother in Korea is a birth mother, and my Norwegian mother is who I think of as the mother in the story.” That experience will influence a book someday somehow. Now I think of the readers from other countries out there. It will power up my work.