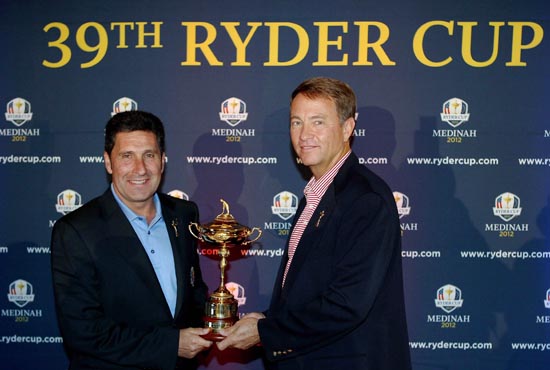 Jose Maria Olazabal, left, and Davis Love III, pose for a photograph with the Ryder Cup at Medinah Country Club on Monday in Medinah, Illinois. [AFP/YONHAP]


MEDINAH, Illinois - Ryder Cup captains Davis Love III and Jose Maria Olazabal were impressed with the course at Medinah Country Club, including the shortened No. 15.

Rain kept Love and Olazabal from playing the famed No. 3 on Monday, as they marked the one-year countdown to next year’s Ryder Cup. But they did get out to look at some holes, and said they don’t envision many changes being needed.

“I cannot imagine a better host for this event,’’ Olazabal said. “It’s a traditional, tree-lined course, and I think the changes you’ve done to the 15th hole, I think [the] last four holes are going to be very exciting for the matches in the year to come .?.?. The last four holes are perfect for match play. You have a combination of two tough holes, 16 and 18, and two exciting holes, 15 and 17.’’

Since the PGA Championship was at Medinah in 2006, No. 15 has been shortened 100 yards and is now a drivable par-4. A lake was also added on the right side of the fairway and green.

“I can see a lot of things going on in that hole, guys going for the green, guys being safe,’’ Olazabal said. “With that little change on 15, those last few holes are going to be very, very interesting. That’s what you need in match play. You have to have holes where risk-reward can be part of it.’’

Europe has won six of the last eight Ryder Cups, including last year’s dramatic finish in Wales. The Ryder Cup was decided by the final singles match for the first time since 1991 after the Americans rallied from a three-point deficit on the last day.

Set No. 3 up for the Ryder Cup as if it was a major championship, and Love said it will be fine.

“I don’t think you have to do too much to this golf course,’’ he said. “I don’t know if there’s a way for it to be an advantage one way or another. We’re both going to have super-talented, long-hitting teams that make a lot of birdies. What’s the most exciting thing to watch, for me, is making birdies rather than putting for pars. If I was setting up the PGA Tour course, I would lean more toward birdies than putting for pars.’’

Though there were some criticisms about No. 3 earlier this summer - the new grass that was planted in the fall of 2009 was sparse - Medinah officials are confident the course will be in good shape next year.

All golf courses were challenged by the extreme weather this summer, said Curtis Tyrrell, Medinah’s director of golf course operations. But No. 3 is only halfway through its growing timeline, and Tyrrell said it is in “excellent shape’’ now.

“We feel very confident about where it will stand next year,’’ Tyrrell said.

Aside from No. 15, the only other change that might be noticeable is the absence of the “Sergio tree,’’ the massive old oak on No. 16 made famous by Sergio Garcia.

While Olazabal and Love are still negotiating, they said they are leaning toward keeping four assistant captains for each team. Olazabal also said he would not play even if he earns enough points to get a spot on the European team.

“I gave my word that I was going to be captain.”