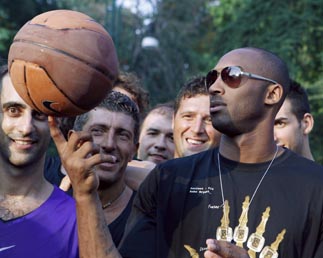 U.S. basketball star Kobe Bryant plays with a ball during a sponsor’s appearance in Milan, Italy on Wednesday. [AP/YONHAP]

MILAN - Kobe Bryant said it was “very possible’’ he will play in Italy during the NBA lockout, adding that the country is like “home’’ to him since he spent part of his childhood there.

Virtus Bologna has made numerous contract offers to the Los Angeles Lakers star and Bryant discussed the situation with the Gazzetta dello Sport during a sponsor’s appearance in Milan on Wednesday.

“It’s very possible. It would be a dream for me,’’ Bryant said, according to Gazzetta. “There’s an opportunity that we’ve been discussing over the last few days. It’s very possible and that’s good news for me.’’

Bryant later spoke to a crowd - in Italian - at the event in Milan.

“I don’t know what’s going to happen over the next three or four weeks, but Italy has always been in my heart,’’ Bryant said.

Virtus told The Associated Press that the latest talks are centered on a $2.5 million offer for 10 games over 40 days from Oct. 9 to Nov. 16. That would come out to about $1.5 million after taxes.

The deal would allow Bryant to return to the Lakers immediately if the lockout ends.

The 33-year-old Bryant spent several years in Italy when his father, Joe “Jellybean’’ Bryant, played with Sebastiani Rieti, Reggio Calabria, Pistoia and Reggio Emilia from 1984-91. The elder Bryant also once owned a small part of Olimpia Milano, while he now coaches the Los Angeles Sparks in the WNBA.

“Italy is my home. It’s where my dream of playing in the NBA started. This is where I learned the fundamentals, learned to shoot, to pass and to [move] without the ball,’’ Kobe Bryant said, according to Gazzetta. “All things that when I came back to America the players my age didn’t know how to do because they were only thinking about jumping and dunking.’’

Turkish club Besiktas and at least one team in China have also expressed interest in Bryant, who has won five NBA championships and been an All-Star 13 times, but he seems most interested in the Virtus offer.

“It’s a huge honor for me to return to Italy. It’s home for me,’’ Bryant said in fairly fluent Italian in a video posted on the Gazzetta website. “It’s always been a dream for me to play in Italy. We’ve got to wait and see what happens.’’

The NBA season usually begins in late October but owners and players have failed to agree on a new labor deal. The two sides are at odds over how to divide the league’s revenue, a salary cap structure and the length of guaranteed contracts.

On Friday, NBA officials announced the postponement of training camps and the cancellation of 43 preseason games.

Virtus has won 15 Italian league titles but none since 2001, when it also won the Euroleague for the second time.

Bologna opens the Italian league against Roma on Oct. 9. It did not qualify for this season’s Euroleague, although the team has big ambitions after signing former Clemson point guard Terrell McIntyre, who led Siena to four consecutive Italian titles before transferring to Malaga in Spain for last season.