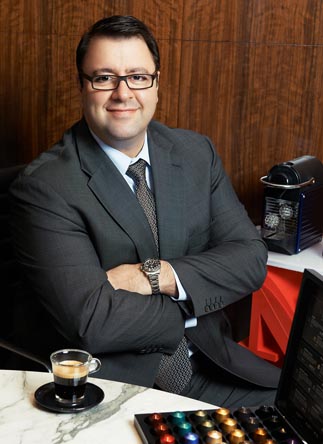 When Nespresso Korea introduced its coffee capsules and machines to the local market in 2007, critics were skeptical about its success. They argued that Koreans prefer freshly brewed coffee at chains like Starbucks when outdoors or instant coffee mixes at their offices, leaving no room for a new creation to survive in the market.

Unlike instant coffee mixes, which are already brewed then ground into powder and sealed in packets, often with cream and sugar, Nespresso’s new product puts ground, fresh coffee beans in an airtight capsule that customers brew instantly in a special machine.

He said critics have underestimated the level of sophistication of the market, and that the Korean affiliate of the world’s leading capsule coffeemaker has the potential to flourish here.

Garrop was speaking to the Korea JoongAng Daily prior to the Sept. 29 launch of Dhjana, a new limited-edition capsule coffee.

“No market [for capsule coffee] in the world is growing as rapidly as Korea,” said Garrop, who served as a commercial manager at Nespresso Australia until two months ago.


Q. Can you tell us about the size of the world market for capsule coffee and Nespresso’s place in this?

A. Globally, capsules make up 8 percent of the global coffee market. Nespresso has been very fortunate in that journey, and it has been able to grow on average 30 percent every year for the last 10 years. The entire Nespresso business last year raised over 3.5 billion Swiss francs ($3.9 billion).

How fast is the Korean market growing?

As Korea is such a young market - Nespresso has only had a presence here for the last four years - it is outpacing global growth [which stands at 30 percent] and that reflects how Korean consumers are accepting quality coffee and also our business model.

How does the local market stand in the context of Asia generally?

In just a short period of time, Korea has become the No. 2 Nespresso market within the region after Japan. The interesting thing for me in answering that question is that we’re not comparing markets that aren’t at the same stage of development.

For example, Nespresso has been serving the Japanese market for 24 years and they’re at very different stages. I’m very pleased with the performance in Korea in these first four years, because achieving that type of growth in European markets took 10 years.

So certainly we’re creating history in Korea. I do want to be fair to countries like Japan, who we’ve been doing business with for 24 years, however, so it’s not fair to compare the two.

Can you tell us about the significance of the Dhjana launch?

First, I’d just like to talk a little bit about the origin of Dhjana. In 2003, we started our AAA Sustainable Quality program, working closely with farmers to talk about sustainable farming practices but also supporting the community and paying higher than farm-gain prices.

These elements really became the foundation of the program, which has now grown to include 40,000 farmers around the world. At the moment, 60 percent of our coffee is sourced from AAA-program farms, and we have a goal of expanding this to 80 percent by 2013. Dhjana is the first limited-edition coffee that’s 100 percent sourced from the farms on this project.

Starbucks launched its premium instant coffee Via a few weeks ago. Does this pose a threat to Nespresso?

We want to create the ultimate coffee experience for consumers and to do that we have divided our business into three parts. We call this the Nespresso trilogy. The three parts are: high-quality coffee, machines that are innovatively designed and which work well, and after sales and boutique services. I think this makes us unique.

Perhaps it’s very simple for a coffee company to produce a new coffee, but I would say that the Nespresso trilogy makes us unique and it makes us a category of one. So we don’t really have a direct competitor.