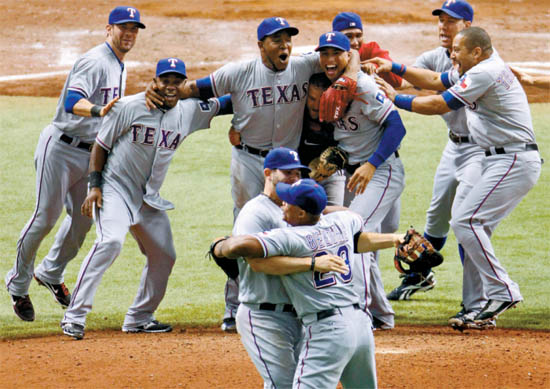 Members of the Texas Rangers celebrate their 4-3 win over the Tampa Bay Rays in Game 4 of baseball’s American League division series, Tuesday, in St. Petersburg, Fla. The victory gave the Rangers a 3-1 series win. [AP/YONHAP]

Beltre became just the seventh player to homer three times in a postseason game, and the first since Adam Kennedy of the Angels in 2002. Babe Ruth, Reggie Jackson and George Brett also are on the list.

The Texas slugger connected in his first three at-bats. Given a chance to tie the big league record of four homers in a game, Beltre hit a flyout in the eighth.

Rangers closer Neftali Feliz gave up a run in the ninth inning before closing for his third save of the series.

Texas won for the fifth straight time on the road - all at Tropicana Field - in an opening-round playoff series. The Rangers eliminated Tampa Bay in five games last year.

Ian Kinsler led off the game for Texas by homering on the second pitch from Rays rookie Jeremy Hellickson.

Then it was Beltre’s turn. He came into the game in an 1-for-11 slump in this series before breaking loose.

“The first couple games their pitching was really good,’’ Beltre said. “Today something changed, I felt more comfortable at the plate, and I did something to help my team win.’’

Beltre hit solo shots off Hellickson in the second and fourth innings, and added another solo drive against Matt Moore during the seventh.

Beltre signed with Texas in the offseason after playing last year in Boston. He and Kinsler tied for the team lead with 32 homers, and Beltre had been on a late-season tear going into the playoffs.

In Phoenix, Paul Goldschmidt hit a grand slam and tied a franchise postseason record with five RBIs as Arizona cruised past Milwaukee 8-1, staying alive in the National League Division Series with 2-1, while Philadelphia hung on to edge St. Louis 3-2 and take a 2-1 lead in their NL Division Series.

In Detroit, maligned pitcher A.J. Burnett came through when New York needed him most, leading the Yankees to a 10-1 victory that squared the AL Division Series against Detroit at 2-2.