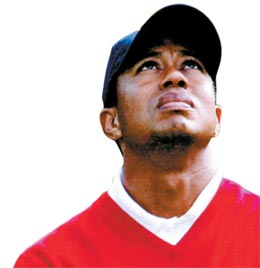 SAN MARTIN, California - The Tiger Woods factor has overshadowed the build up to this week’s Frys.com Open at CordeValle Golf Club where the former world number one will make his first PGA Tour appearance in almost two months.

Woods has not competed since he missed the cut at the PGA Championship in August, sparking widespread speculation about his form.

A 14-time major champion who is comfortably the best player of his generation, Woods has not won a tournament since the 2009 Australian Masters and his ranking has slipped to a mind-boggling 51st.

Ever since his private life unravelled in sensational fashion at the end of 2009 and he tried unsuccessfully to repair his crumbling marriage, he has been a shadow of the dominant player he once was.

He has struggled for form and fitness this season, and has yet to reap the benefits of the fourth swing change of his professional career.

Fellow American Rocco Mediate, however, fully expects Woods to regain his stranglehold on the game once he becomes accustomed to his revamped swing.

“It’s the physical motion that’s causing the problem, period,” Mediate told reporters on Tuesday while preparing for his title defense at CordeValle.

“If he gets his golf swing back, the ball game is over. Trust me. He knows that once he figures out where his ball is going, it’s over. He’s already proved it 71 times, in 14 majors. I think he can be better than he was before.”

Woods has won 71 PGA Tour events since turning professional in late 1996, although the most recent of them came at the 2009 BMW Championship.

This week, at the urging of United States Presidents Cup captain Fred Couples, he will be competing for the first time in one of the PGA Tour’s Fall Series events which generally attract only the journeymen on the U.S. circuit.

Huge Frys.com Open billboards depicting Woods and Mediate have been erected beside the freeways heading north and south of San Martin and ticket sales for the event are five times up on last year’s figures.

“I’m really happy he’s playing here because it’s huge for this event and huge for the Fall Series,” smiled Mediate.

“I like when he’s in the field and he’s playing his best because it gives you an opportunity to beat the best guy.”

Kevin Na, who won his first PGA Tour title at last week’s Las Vegas Open after going winless in his previous 210 career starts, was also delighted to have Woods in this week’s field.

“I am still a Tiger fan,” said the Korean-American. “I watched him play when I was a kid.

“The biggest question people ask me is: ‘Do you think he’ll win again?’ I say: ‘Definitely.’ He’s definitely going to win again.

“But I also tell them that people don’t realize how much other players have stepped up to his level. There are more guys now who are breaking through.”