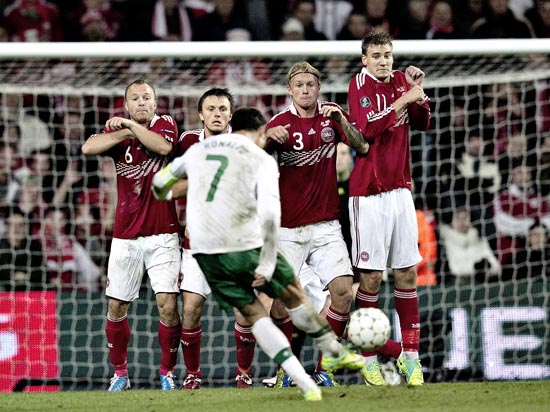 Portugal’s Cristiano Ronaldo, back to camera, scores against Denmark in their Euro 2012, group H, qualifying match at Parken Stadium, Copenhagen, on Tuesday. Denmark defeated Portugal 2-1 and secured their berth for Euro 2012. France, Greece, Russia and Sweden also earned their spots on Tuesday and joined already-qualifed Germany, Spain, Italy, Netherlands and England along with co-hosts Ukraine and Poland. The playoff teams will be Estonia, Montenegro, Croatia, Portugal, Ireland, Czech Republic, Turkey and Bosnia-Herzegovina. The draw for the playoffs will be made in Krakow today. [AP/YONHAP]