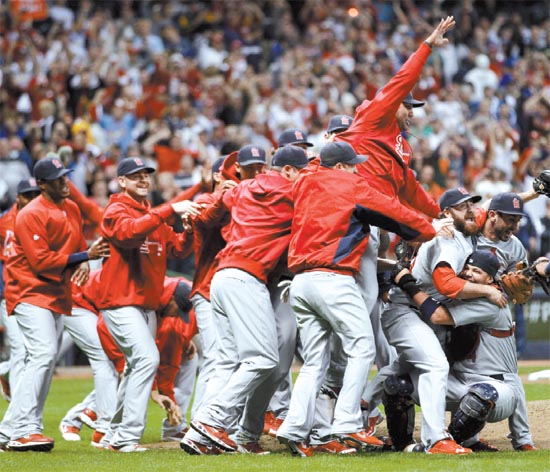 The St. Louis Cardinals celebrate after Game Six of baseball’s National League championship series against the Milwaukee Brewers Sunday in Milwaukee. The Cardinals won 12-6 to win the series and advance to the World Series. [AP/YONHAP]


MILWAUKEE - The St. Louis Cardinals advanced to the World Series on Sunday after a 12-6 victory over Milwaukee in Game Six sealed the National League Championship Series.

The Cardinals will play American League champions Texas, who travel to St. Louis for Wednesday’s opener of the best-of-seven Major League Baseball championship.

St. Louis scored four runs in the first, one in the second and another four in the third inning to seize a 9-4 lead and were never headed as they clinched the series 4-2 and booked their first return to the Fall Classic since winning it in 2006.

Cardinals starting pitcher Edwin Jackson went only two innings, but as they did all series long, their relievers shut the Brewers down to secure the win.

Freese’s homer followed an RBI single by Lance Berkman to put the Cardinals ahead 4-0.

The outburst continued a St. Louis trend as the Cardinals scored first in every game, putting runs on the board four times in the first inning during the series and scoring in the second inning of the other two games.

“They were unbelievable in the first inning,” said Brewers manager Ron Roenicke. “We couldn’t get away with anything. We just never had a chance to get into our comfort zone, get into our rhythm. They just didn’t let up on us.”

The early action felt like a home run derby as six were hit in the first three innings and nine of the first 10 runs came from round-trippers.

Corey Hart homered in the first for Milwaukee, Rafael Furcal matched his solo homer in the second, while in the Brewers’ half of the second, Rickie Weeks and Jonathan Lucroy cleared the fences to bring the home team within one at 5-4.

Albert Pujols’s blast leading off the third made it 6-4 and the Cardinals added three more runs on a sacrifice fly by Nick Punto and a two-run single by pinch-hitter Allen Craig.

After a sloppy showing in Friday’s Game Five in St. Louis, in which Milwaukee committed four errors in a 7-1 loss, the Brewers were once again loose in the field with three miscues.

In all, St. Louis’ relievers pitched a remarkable 28 and 2/3 innings against just 24 and 1/3 innings by the team’s starters.

“They pitched with a lot of heart,” La Russa said.

“You don’t get in the postseason unless you have great starting pitching. But it was a unique and weird situation, the starters couldn’t make a mistake and get away with it.”

Freese, who went 3-for-4 to pace the Cards’ 14-hit attack, saluted the team’s relief corps.

“I wish we could do eight or nine of these and give them to the bullpen,” he said while clutching the MVP trophy. “What they did, they really deserve this award.”

Left-handed reliever Marc Rzepczynski registered the win, while Milwaukee starter Shaun Marcum, who was tagged for four runs in his lone inning of work, took the loss.

Jason Motte closed it out in the ninth, setting off a group hug and chant of “Happy Flight, Happy Flight,” in the middle of the diamond, repeating a theme that brought the Cardinals wins in their last 17 games on travel days.

St. Louis, who trailed Atlanta for the wild card by 10 and 1/2 games with one month to play, clinched the playoff berth on the last day of the regular season.

“They never quit,” said La Russa. “Once they got going, the guys played every game as if it were the last game of their lives.”