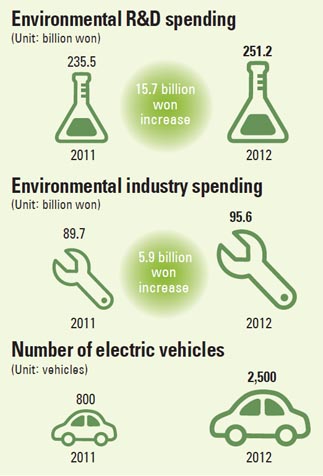 Up until now, the national budget for the environment sector has been used for water supply service, sewerage and refuse disposal among other services that are mainly focused on the expansion of the environmental infrastructure.

The Ministry of Environment has said that the main investment will be made into making green growth and any other future environmental values a reality. The national budget for the environment sector in 2012 is 5.15 trillion won ($4.5 billion), which is a 374 billion won, or 7.8 percent, increase from last year’s 4.78 trillion won. Overall this is a 1.6 trillion won, or 46.1 percent, increase since the start of President Lee Myung-bak’s administration.President Lee’s administration has continuously been working on investing in the environment sector and for the first time next year, the ministry is looking at a budget over 5 trillion won.

Moreover, the government is also expanding investment in the waste water disposal system by increasing spending from 220 billion won to 345 billion won, an increase of 57 percent, that will help revive the local economy as well. They will also diversify ways of water quality improvement and by next year there will be 980km (609 miles) of ecological waterways and expanded investment for reducing nonpoint pollution. 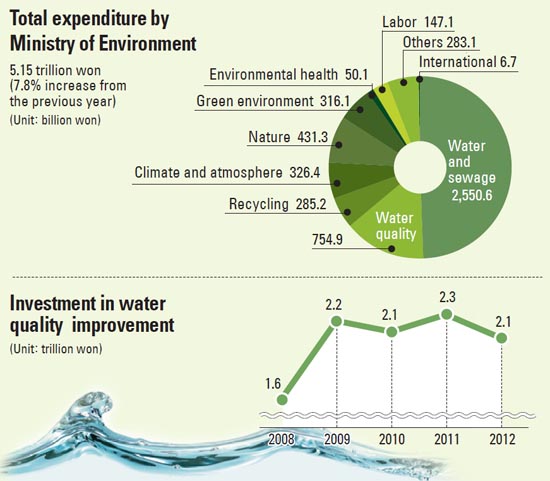 Also, the government is going to be deeply involved with the actions to be taken to tackle climate change around the world. Through this it is expected that Korea will be at the forefront of global green leadership.

The government will also accelerate investment in the R&D sector for new technologies and from next year will invest 2.5 billion won in the development project of the complex environmental payload schedule to be launched in 2018 for better monitoring of climate change in East Asia.

Because the environmental industry is producing visible outcomes, the government will focus on investing in the sector and moreover encourage development in environmental companies that will lead the green growth policy. Also, it will build up the basis for the BT industry and exert sovereignty over national organisms.

There will also be increased investment to create a more pleasant environment for ordinary people.

As an ecological service for the people, the government will manage the national parks, wetlands and ecological landscapes systematically and will expand ecological trails and downtown green trails.

The government is also planning on investing for the first time in areas like “everyday life environmental health R&D” for better control with hazardous substances as well as prevention centers for atopic dermatitis.

Additional funds will be invested in environmental health sectors to create more activity spaces for children and reinforce safety supervision for children’s products.

For early expansion of the quantity based food waste system, the government is going to invest 3 billion won in 8 cities or counties in the RFID system for collecting refuse.

To improve the quality of drinking water for low-income groups, the government is expanding its water pipe improvement project to 2,728 households.

The Ministry of Environment has announced that they will work hard to bring healthier ecology and a more pleasant way of life to the people, which will be worth a total of 5.15 trillion won.