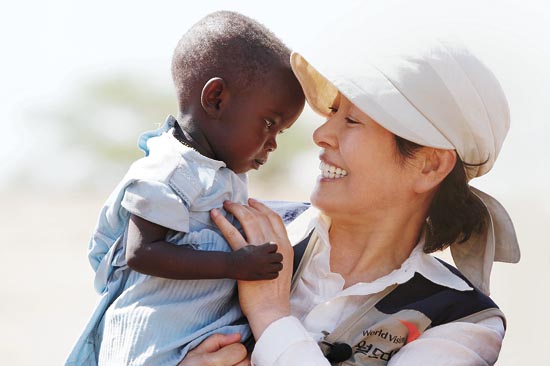 
On Tuesday, veteran actress Kim Hye-ja, 69, was at the Sejong Center for the Performing Arts in central Seoul to receive an award, not for her superb acting skills but for her good deeds. Kim was among 108 people who were honored as men and women of merit for “putting sharing into action” by the Ministry of Health and Welfare.

As a goodwill ambassador for the nonprofit Christian relief organization World Vision, Kim has traveled to about 20 countries in 20 years, spending most of her time in war-torn and disaster-stricken areas in Ethiopia, India and Sierra Leone. She now sponsors a total of 103 children from underdeveloped countries who suffer from hunger and disease and visits these children whenever she has time.

“I don’t know why people say things like, ‘It must be so hard for you to do all the work you do to help needy children,’ because I don’t think helping and sharing should be something difficult,” Kim said at a press conference after the ceremony on Tuesday. “I’ve been loved by many fans and I want to share that love with the children who really need to be loved.”

Kim is perhaps most famous for her role in the 2009 film “Mother,” for which she received the best actress award from the Los Angeles Film Critics Association in December 2010.

Her volunteer career began around 20 years ago after she had finished filming the drama series “What is Love?” in 1992. She said she wanted to take a vacation with her daughter, but hadn’t yet decided where to go when she got a call from World Vision asking her to visit Africa with them.

“They said, ‘It’s about time that Korea, which has been a beneficiary of foreign aid, helped other countries in need,’?” Kim recalled. She said she was instantly persuaded.

“Honestly, when I was packing my bags, I thought it would be a simple trip to Ethiopia,” Kim said. “But when I got there, I was shocked by the harsh reality of children dying from starvation. I never imagined there could be such a devastated country in the world I lived in. It was a living hell.”

Nearly two decades later, Kim said the situations in these countries have improved, albeit gradually.

“Now, whenever I go on these trips, I try to observe everything and find out what these children really need and then tell people about it,” Kim said. “I’m a Christian and it says in the Bible that you should ‘not let your left hand know what your right hand is doing’ but I believe that my role is to tell as many people as I can about the reality in these countries.”

Kim also talked about her trip 20 days ago to a refugee camp in Daddab, near the Kenya-Somalia border.

“I was there 18 years ago and the situation was devastating,” Kim said. “And when I visited the place again, hoping to see some development, I was shocked to find out that it was exactly the same as 18 years ago, or even worse. A mother who brings in five children will see three of them die on average. And the women can’t even cry, because they are just dumbfounded by the situation. We have to turn our attention to these children. Even puppies in Korea don’t die like that.”

Kim said that of the 103 children she sponsors, she has a special bond with a girl surnamed Ekumanu who is from Turkana District in Kenya.

“In 2006, I visited Kenya and met a six-year-old girl named Ekuamu,” Kim said. “She was waiting for her mother to bring back some food but when that didn’t happen, she went to sleep clenching her stomach in hunger. As I was leaving, I promised to come back and see her again.”

After returning to Korea, Kim asked people who leaving for Kenya to track the whereabouts of Ekuamu, as the family is nomadic. But no one was able to find her. So six years later, Kim went back to Kenya carrying a picture of Ekuamu and found her.

“When she saw me after six years, she cried in my arms with eyes that seemed to ask why I was so late in coming to see her,” Kim said with tears in her eyes.

“I want to ask all the volunteers who visit these countries and meet these children not to make promises they can’t keep, for example, telling them that you’ll return to see them if you are not sure you can do it because these kids really wait for you.”

Kim said that she had even invited Ekuamu and her two younger siblings to Seoul several years ago, a decision she said she now regrets because they couldn’t digest the food she offered.

“I thought they would jump for joy when I took them to a buffet. But they couldn’t digest the food. All they had during their stay in Seoul was bread and bananas,” Kim said.

“People say that the furthest distance you will ever travel is the distance between your head and your heart. Koreans are ready to share and they know it is time for them to do. Now they have to get motivated and put their words into action.”