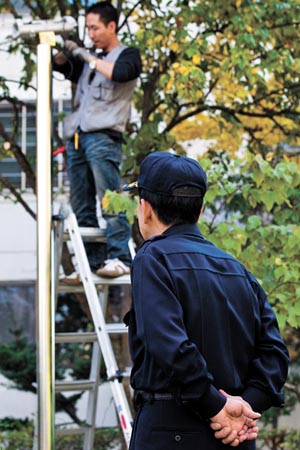 A security guard watches as CCTV cameras are installed on Tuesday at an apartment complex in Mok-dong, western Seoul. By Kim Seong-ryong

Yoon Jin-ho watched as workers installed a CCTV camera at the entrance to the apartment where he has worked for 11 years. The 64-year-old security guard at Mokdong Apartments in Seoul’s Yangcheon District let out a deep sigh.

“I’ll have to pack my bags and go home as soon as they’re done installing the CCTVs and automatic doors,” said Yoon.

After losing his job at a pharmaceutical company in 2000, Yoon found work as a security guard here, where 3,100 households reside. Yoon works 24-hour shifts at a time with no breaks and takes home about 1 million won ($900) a month.

“I work from 6 a.m. to the same time the next day, but I feel grateful for my work,” said Yoon. “I don’t have much in savings, and I don’t know how I’ll make ends meet for me and my old wife if I lose this job.”

Apartment security guards, or gyeongbi, are ubiquitous in Korea. Nearly every apartment complex has a staff to keep vigil over who enters and leaves, deliver packages, monitor the garbage and recycling bins and provide a friendly “hello” to residents.

They are also almost all older men: 87 percent of the country’s security guards are over the age of 60. The jobs, while long and tough, are a critical source of income for hundreds of thousands of senior citizens in a country with no comprehensive social security program. 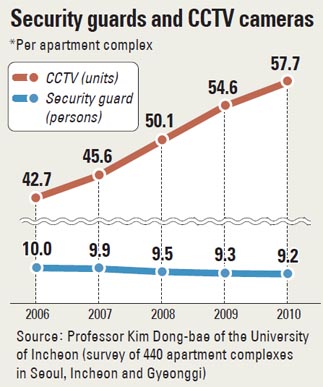 But some 400,000 security guards nationwide are faced with the real possibility that their jobs will soon be gone, replaced by machines and particularly - and unintentionally - by a raise in the minimum wage.

In a 2007 revision to the country’s minimum wage spearheaded by the Lee Myung-bak administration, lawmakers ensured that all paid workers would receive 100 percent of the minimum wage, 4,580 won per hour, and end exemptions that had allowed employers to pay less for certain occupations.

The revision did, however, allow an exemption for security guards out of concern that apartments would lay them off en masse when faced with higher paychecks. Instead, the Ministry of Employment and Labor allowed a five-year grace period, during which security guards, who would see their pay rise to 70 percent of the minimum wage, would make the full wage by 2012.

The prospect of a sudden pay raise for security guards next year has apartment residents clinging to their wallets. Guards’ salaries usually come from monthly maintenance fees that are paid by apartment residents, many of whom say that they are already burdened by increasing living expenses in a weak economy.

“If we ask residents to increase the maintenance fee by 1,000 won to increase pay for security guards, they oppose strongly, saying that inflation is already a burden for them,” said Chae Su-cheon, chairman of the National Apartment Residents Committee.

Chae added, “Because of the minimum wage law, about 70,000 to 80,000 security guards nationwide are about to lose their only source of income.”

Apartments around the country have already begun turning to technology to replace the elderly, installing automatic doors and security cameras that require minimal staff.

Mokdong Apartments, where Yoon works, has been installing 356 CCTV cameras in their 34 buildings since June at a cost of 250 million won. Paying all of its 128 security guards the full minimum wage would have added 40,000 won to 70,000 won per month to each household’s maintenance fees.

In 2007, Jungsan Village, an apartment complex in Ilsan, Gyeonggi, where 608 households live in 10 buildings, was the first residential complex to adopt an unmanned security system and fire its 20 security guards after the government mandated that all guards be paid 70 percent of the minimum wage. Among 20 security guards, four were rehired as cleaners, but the rest lost their jobs.

Today, a red-brick guard post stands at the entrance of Jungsan Village. On the door is a sign that reads, “911 Integrated Management Security System Center.” Inside, two young security guards from a private security company have been hired to monitor dozens of CCTV cameras. A total of five security guards at Jungsan Village take turns in pairs to work day and night shifts.

Next to the guard post, an automatic barricade only opens for vehicles with a digital key, and the entrances to apartment buildings have automatic doors that open with a password.

“Although 70 percent of the residents agreed to fire our security guards and adopt an unmanned security system, many opposed as well saying that firing elderly security guards was too harsh,” said Choi Seung-ho, a representative for Jungsan Village.

“I feel safer with the CCTVs. Someone stole my bike, and I was able to catch him thanks to the CCTV,” said Cha Hye-sook, 55, a resident of Jungsan Village.

Some residents are not as enthused about the unmanned security system.

“I used to get cheered up by the guards who welcomed me as I came home after a tiring day at work,” said Park Sung-hyeon, 48. “But now, the whole area feels dreary.”

Another resident surnamed Shin, 49, said, “People say we are saving a lot in monthly maintenance costs but I can’t tell the difference,” adding, “It’s also troublesome to have to go all the way to the main gate to pick up packages when they used to be delivered to our door when I wasn’t home.”

But no one is less happy with the changes than the security guards themselves, upset with a minimum wage law that was supposed to help them.

“Even if I don’t get a pay raise, I want to continue working,” said a security guard surnamed Park, 66, who has worked at Hanshin Apartments in Banpo-dong, Seoul, for 10 years.

“Security guards have endless tasks. We have to manage the parked cars as well as separate the garbage, receive parcels, clear the snow, do some gardening and everything else that needs to be done to take care of the apartment complex,” said Park. “Not many residents understand the hardships of security guards.”

Since 2007, the number of security guards has steadily fallen in favor of CCTVs, and security guards fear that the full implementation of the minimum wage next year will only accelerate the loss of jobs.

A study by Professor Kim Dong-bae of Incheon University, who examined 440 apartment complexes in Seoul and Incheon, found that the number of CCTVs in apartments had increased by an average of 35 percent since 2006 while the number of security guards had decreased by 7.7 percent after their pay was increased to 70 percent of the minimum wage.

“We have a long waiting list of apartment complexes that want to install CCTVs,” said an official from a private security company in Seoul.

Critics of the 2007 minimum wage law have pointed fingers at the Ministry of Employment and Labor for not thinking through the consequences of mandating 100 percent of the minimum wage for security guards.

They also say the ministry neglected to come up with measures to counteract the negative effects. Already, many of the country’s apartment complexes have begun cutting working hours for security guards to prevent paying them more in salary.

Kim, from Incheon University, found that the same thing happened when the government raised security guards’ pay to 70 percent of the minimum wage in 2007.

“Although the minimum wage for security guards increased, the actual paycheck they received was about the same because the residents reduced their hours,” he said.

A proposal to keep the minimum wage exception for security guards has begun to gain ground.

“The union is planning to negotiate with the ministry to pay security guards 90 percent of the minimum wage,” said a member of the National Apartment Labor Union. “Applying 100 percent from next year, which is only two months away, will only trigger mass layoffs. The government, in the mean time, must come up with measures to protect the employment of security guards.”