Mother of all tests easier this year

Mother of all tests easier this year 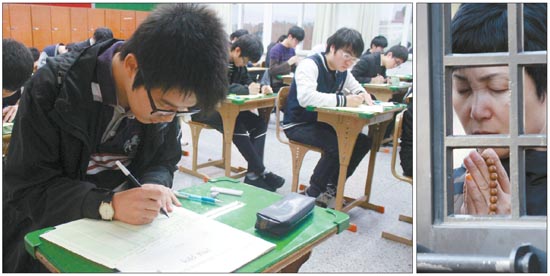 
The 690,000 college hopefuls who made their way past phalanxes of nervous mothers and cheering high school juniors yesterday to take the College Scholastic Ability Test were met by an easier exam than last year.

As promised by the Ministry of Education, Science and Technology after criticisms of last year’s brutal CSAT, test writers said this year’s was designed to be more forgiving.

“We made efforts to have about 1 to 1.5 percent of students with perfect scores in each subject,” said Lee Heung-su, director of CSAT writers, in a press briefing yesterday.

“Taking into consideration that last year’s CSAT was harder despite the fact that a high percentage of questions came from workbook lessons published by EBS, we tried not to make too many modifications this time,” said Lee.

Last year, the ministry ordered test makers to have 70 percent of the exam questions come from lessons and books published by a government-run education television channel, EBS, in an effort to discourage expensive hagwon classes and private tutoring.

On a CSAT prep exam in September, 1.9 percent of test takers received perfect scores on its three sections, and Lee said that yesterday’s test tried to find a balance between last year’s CSAT and the prep test to aim for about 1 percent in perfect scores.

Meanwhile, one disabled student was caught trying to bring in a walkie-talkie into a test center in a possible attempt to cheat, the ministry said.

Another student, according to the Gyeonggi Provincial Office of Education, mixed up his test center with Inchang High School in Guri, Gyeonggi, when his designated test center was Inchang High School in Seoul. As there was not enough time for the student to go back to Seoul, the Korea Institute for Curriculum and Evaluation allowed him to take the test alone with a proctor in the high school’s health room.

The KICE will receive objections to questions or answers on this year’s CSAT until Monday and said it would announce final answers to the test on Nov. 21 at 5 p.m. Test takers will receive their results on Nov. 30.