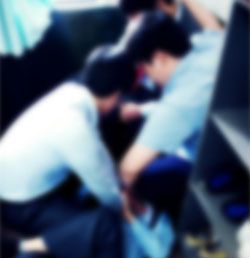 Only two weeks after a female middle school student and a teacher had a hair-pulling catfight at a Gwangju middle school, a similar incident occurred at a middle school in Daegu, shocking education circles.

According to the Daegu Metropolitan Office of Education, a 15-year-old male middle school student surnamed Kwon assaulted 52-year-old vice principal Kim Joon-tae of Kyungpook National University’s Attached Middle School. The incident happened last Tuesday while the teacher was warning the student for having cigarettes. The education office said the student punched Kim in the head several times in order to get his cigarettes back from the teacher.

Last Tuesday at 8:40 a.m., Kim stopped the ninth grader in a hallway in order to check whether he had cigarettes after smelling tobacco. After noticing a bulging pocket in Kwon’s school uniform pants, Kim then confiscated a pack of cigarettes. While Kim was rebuking Kwon’s possession of the cigarettes, Kwon suddenly started beating him, punching and kicking Kim multiple times, according to the education office. During the assault, Kwon yelled at Kim, “Give them back to me, they’re my cigarettes purchased with my own money, you punk.”

Kim collapsed in the hallway from the assault and was sent to a nearby hospital by his colleagues. The education office said he was hospitalized for a few days.

A teacher at the school said Kwon was one of the juveniles in the school who had received several punishments previously. The teacher said that Kwon had broken a classroom window when a teacher tried to confiscate his cell phone as it rang during the class.

Though he was assaulted by his own student, Kim never reported it to either the police or the education office.

“I didn’t want to give him a record for his future,” Kim said.

“I had trouble getting to sleep because I never would have thought that this kind of incident would happen in our school. I think Korean teachers’ authority has hit rock bottom. I got beat up though I’m the vice principal of the school. I can’t imagine how other normal teachers are being treated. In the last decade, the country has put so much attention on improving students’ human rights, barring teachers from inflicting corporal punishment, for example, but never prepared legal countermeasures in managing the teenagers appropriately. I think we [teachers] are counting the cost of the government’s apathy in educating students’ morality.”

After the assault, the school held a disciplinary committee on Monday and suspended Kwon for 10 days, which is the strongest punishment that can be administered. The education office said that middle school students in Korea can’t be kicked out because middle school education is compulsory.

However, there is criticism over failing to provide appropriate guidelines in cases like Kwon’s, so the education office is considering producing manuals for teachers.

“We will make a manual for teachers when they are troubled by their students,” Kim Ki-sik, a Daegu Metropolitan Education Office official said.

Prior to this assault, the female middle school student in Gwangju who fought with her teacher in the school hallway resisted the teacher’s warning not to watch videos on her smartphone during class.