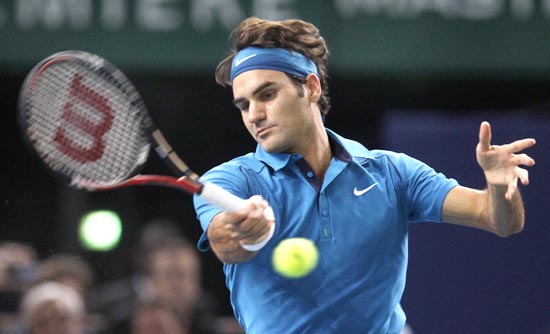 Switzerland’s Roger Federer returns the ball to France’s Jo-Wilfried Tsonga during their final match of the Paris Masters on Sunday. [AP /YONHAP]


PARIS - Roger Federer’s tough season is ending on a high, with the Swiss star beating Jo-Wilfried Tsonga 6-1, 7-6 (3) on Sunday to win his first Paris Masters and 69th title of a glittering career.

The 16-time Grand Slam champion had never previously reached the Paris final, but restricted the sixth-seeded Frenchman to limited opportunities after saving two break points in his opening service game.

“I’m just ecstatic to have played so well this week,’’ Federer said. “I have had many attempts to win Paris and for some reason I wasn’t able to. It’s a special victory.’’

The former No. 1 will end the season without a Grand Slam title for the first time since 2002, and his ranking has dropped to No. 4. But Federer has bounced back, winning the Swiss Indoors last week and now the Paris tournament.

“I have had some really tough losses this year, but I kept believing the year wasn’t over,’’ said Federer, who squandered a match point against top-ranked Novak Djokovic in their U.S. Open semifinal. “I’m not playing to prove anything to anybody. I play for myself, I play for Switzerland and just to enjoy myself.’’

Federer took six weeks off after the Davis Cup playoff against Australia in mid-September and feels it paid off.

“I always plan in the long term,’’ Federer said. “I know how grueling it is out there. Even I need my time away.’’

The 30-year-old Federer heads into the eight-man ATP World Tour Finals in London next week on a 12-match winning streak.

“I can still finish this year on a high,’’ he said. “Now I have a massive highlight coming up in a week’s time.’’

It was his third title of the season and his only Masters. Djokovic has won five Masters this year, third-ranked Andy Murray has won two and Nadal has one.

But with Djokovic troubled by a nagging shoulder injury, Federer will be confident in defending his title in London.

Tsonga improved his serve in the second set, but Federer was simply too strong in the tiebreaker, taking victory on his third match point when Tsonga’s return landed out.

“I felt good today but Roger was just better than me today,’’ Tsonga said. “I knew I needed to play a great match if wanted to win today and I was not able to.’’

Tsonga won the tournament in 2008 but was let down by too many unforced errors on his forehand as he tried to find a way to pressure Federer in their sixth meeting this year.

“I just wish I could have competed more,’’ said Tsonga, who this year beat Federer in the quarterfinals at Wimbledon, but lost at the same stage to the Swiss star at the U.S. Open. Overall, Federer now leads Tsonga 6-3.

“Every time we play each other it’s similar. If I am able to fight back at the start, then I play well,’’ Tsonga said. “But if I lose the first set like I did today, then it becomes more difficult.’’

Federer took only 80 minutes to beat Tomas Berdych in straight sets in Saturday’s semifinal, while Tsonga labored for three hours and saved three match points before getting the better of unseeded American John Isner.

Federer’s sharpness showed as he mercilessly attacked Tsonga’s weak second serve in the first set. He opened up a 4-0 lead after Tsonga, remonstrating with himself over too many loose forehands, double-faulted.

“That was a huge four games for me,’’ Federer said. “I realized how much energy he had and how big he was serving. This is the Jo-Wilfried Tsonga I hoped not to face, but I came through that [first] game.’’

The opening set lasted only 30 minutes, with Federer clinching it with a whipped forehand winner into the open court.

Tsonga saved two match points, but it was a brief reprieve from an inevitable ending as Federer notched his 802nd career win.