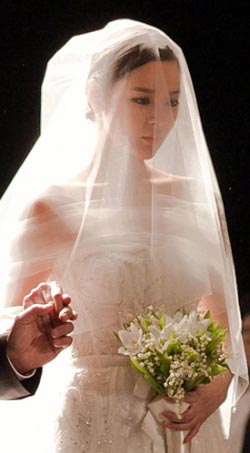 With a group of A-list stars in attendance, actress Park Si-yeon tied the knot over the weekend.

Park, 32, married a man surnamed Park on Saturday at the Hyatt Hotel in central Seoul.

“We will try our best to have a happy family and hope fans offer us heartfelt congratulations,” Park said through her agency, Eyagi Entertainment.

It was reported that the guest list included top entertainers such as singer Lee Hyo-ri and actress Han Ye-seul. Singers Lee Juck and Park Hyo-shin performed and MBC announcer Oh Sang-jin hosted the event, which was closed to the press.

The bride is known for such films as “The Fox Family” (2006) and TV dramas including “The Greatest Love” (2011). Her agency said the newlyweds will have their honeymoon in the United States after the actress finishes work on the film, “Scent of a Woman” (tentative title).