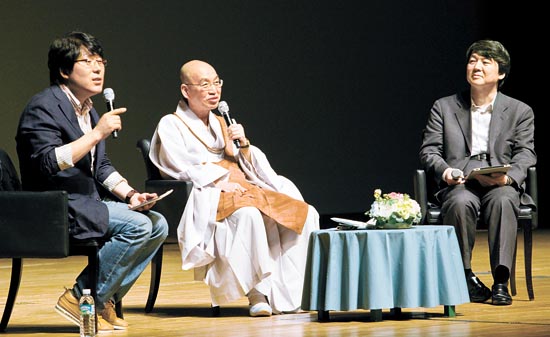 Venerable Pomnyun, center, a liberal activist and founder of the religious community Jungto Family, speaks at a Youth Concert on Aug. 25 organized by Ahn Cheol-soo, right, and Park Kyung-chul, left. By Cho Yong-chul


OSAN, Gyeonggi - A respected Buddhist monk known as the mentor of liberal political phenomenon Ahn Cheol-soo said yesterday the country is in need of a new political party and a new political leader, fueling speculation of the launch of a new party by Ahn.

Venerable Pomnyun, a liberal activist and founder of the religious community Jungto Family, spoke about his views on politics in a two-hour lecture held at the Osan City Hall in Gyeonggi.

Venerable Pomnyun took questions from an audience of 500. One person asked how to resolve the deep rift in the political arena and in society.

“In the newspapers, I have read many articles about Ahn and Venerable Pomnyun,” he said. “What do you think is the alternative?”

Venerable Pomnyun answered without hesitation. “The country will collapse if the conservatives and the liberals, the ruling and opposition parties, continue their fights and regionalism continues,” he said. “If this will continue, we need a new political party.”

“Even if the liberals win the next presidential election, they shouldn’t win by a margin of 51 to 49,” he said. “They must embrace the middle-of-the-roaders to stably seize power in order to reform the country.”

The Buddhist leader has been giving a series of lectures, called “Build a Hopeful World,” around the nation since September, with a goal to hold 102 sessions by early December. The lectures have become popular among audiences in their 40s and 50s, and are described as the middle-aged version of Ahn’s Youth Concerts, which are popular with the young.

Ahn has not publicly said he will establish a new political party. But since his meteoric rise as a popular political figure in September, Ahn has registered in polls as a strong presidential candidate against the long-time frontrunner of the ruling Grand National Party, Representative Park Geun-hye.

Former Environment Minister and former GNP lawmaker Yoon Yeo-joon, a friend of Venerable Pomnyun and an advisor to Ahn, said yesterday in a separate meeting with reporters that the chances are higher than ever for a new political force to succeed because the people are seriously disappointed with the Grand National and Democratic parties.

“We must not let a handful of people do politics,” Venerable Pomnyun said yesterday in the lecture, stressing that nonpoliticians should talk about politics more freely and passionately. “The people must wake up and elect a new leader.”

He warned the media not to interpret his remarks too broadly.

“The newspapers will all report tomorrow that I will be opening a new political party,” he said.

During the lecture yesterday, Venerable Pomnyun did not hesitate to attack the Lee Myung-bak administration.

“The voters all knew four years ago that he was unethical, but still elected him because he was an economy expert and everyone only wanted to earn money,” he said. “So did you make money?”

Venerable Pomnyun also made a remark apparently referring to the GNP’s Park. When an audience member said it was too difficult to raise children these days, he said, “For a woman, becoming a president is not the only important thing. Raising children is more important than anything.”