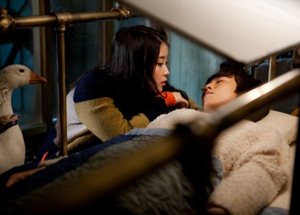 IU’s fans’ anticipation grew as the singer revealed a preview of an upcoming music video titled “You and I.” On Sunday, fans were in for a surprise as a teaser of the music clip was shown on SBS’s “K-pop Countdown.”

The clip featured a somewhat mature and lady-like IU looking down at a boy who is fast asleep.

The character who plays IU’s love interest is none other than the actor Hyun-woo who is also the same age as the pop princess. Hyun-woo is a celebrated child actor who is renowned for acting abilities beyond his age.

The mysterious ambience exuding from the scene has tongues wagging as to what the relationship between the two will be like in the video.

Much hype is generating due to the film clip and fans will be relieved to get their hands on IU’s new album “Last Fantasy” today. IU’s second album is set to “contain IU’s touch and creative direction as well as showcasing her present ability and future potential as a budding artist,” IU’s agency said.