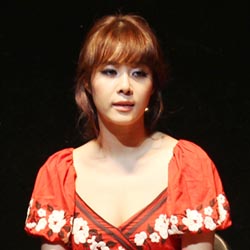 Singer Ock Joo-hyun of popular girl group Fin.K.L is finally taking the stage as a solo artist 13 years after her debut. EMK Musical Company announced that Ock will squeeze in a solo concert on Dec. 11 amidst preparations for February’s production of the musical “Elizabeth.” The concert will be held at the Blue Square Samsung Card Hall, a brand new building in Seoul equipped with top-quality lights and sound systems that will help enhance the musical star’s first solo performance.

The concert, titled “Ock Joo-Hyun 1st Concert” and subtitled “Intermission,” will consist of numbers that Ock has performed over the years from musicals such as “Aida,” “Cats,” “42nd Street” and “Chicago.” Some of the highlights of the upcoming show will include iconic songs “Memory” from “Cats” and “Time Marches On” from “The Count of Monte Cristo.”

Guest appearances by Ock’s fellow cast member from “Guys and Dolls” Jung Sun-ah as well as Park Eun-tae, who will co-star with Ock in the musical “Elizabeth” next year, are set to delight the fans.