[INTERVIEW] Turning the nuclear tide by 2015

[INTERVIEW] Turning the nuclear tide by 2015 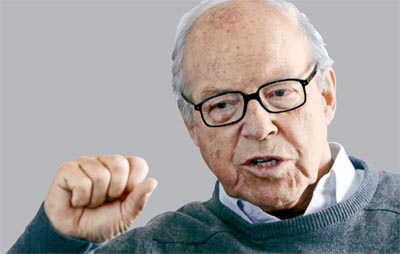 Swedish diplomat and politician Hans Blix is one of the world’s leading authorities on nuclear weapons. In particular, Blix, former head of the International Atomic Energy Agency (from 1981 to 1997) is known as an expert on North Korean nuclear issues. Besides visiting the country several times during the 1990s, he also took part in the Geneva Agreed Framework in 1994 between North Korea and the United States.

His ultimate goal is to rid the world of nuclear weapons and put nuclear energy to more beneficial uses. With this goal in mind, he has been appointed one of the main members of President Lee Myung-bak’s “Eminent Persons Group.” The JoongAng Ilbo conducted an e-mail interview with Blix ahead of his visit to Korea this week, which comes several months before the second Nuclear Security Summit in Seoul in March.


Q. There are around 50 countries participating in the Nuclear Security Summit in Seoul. How crucial are talks on nuclear weapons at this point?

A. The first summit on nuclear security was held in Washington in 2010 and was part of the welcome drive initiated by President [Barack] Obama to breathe new life into nuclear arms control and disarmament. It aimed at ensuring within four years that nuclear material, equipment and know-how everywhere should be under control and not risk coming into the hands of terrorists. ... The Nuclear Security Summit in Seoul should be used by the leaders to revive attention to the threat that continues to be posed by nuclear weapons and the worrisome new waves of armament - not least in Asia.

How serious is the threat of terrorists using nuclear weapons to launch an attack?

The risk of terrorists acquiring and delivering nuclear weapons is generally deemed to be low. Terrorist networks are not vast and resourceful. For this reason they have hitherto used simple techniques, weapons and explosives. This is no reason for complacency about the control of our borders and sensitive installations. A dirty bomb that contains radioactive material and is set off by conventional explosives is not likely to cause much physical damage, but will contaminate and have a strong terror effect. Such bombs would require nuclear material and this is a strong reason for all states committing themselves to effective control of all such material, through accounts and inspection. Many developing countries need international assistance to ensure such control. Nuclear-experienced countries like South Korea could help in establishing and maintaining such controls.

After the Fukushima nuclear disaster, Germany announced that it will scrap production of nuclear power and Switzerland and Italy are following a similar path.

In Germany there has been a strong opinion against nuclear power for a very long time, despite the fact that the country’s nuclear power sector has worked very well. It is puzzling that Germany walks out of nuclear power while Ukraine is walking on after the Chernobyl accident.

I think the German decision to phase out nuclear power was unfortunate and I fear that Germany will not be able to fulfil the targets of reducing CO2 emissions. There will be an expanded use of renewable energy sources, like wind and solar power in Germany and many other countries.

What about further developing renewable energy sources instead of using nuclear power?

Megacities like Seoul, Shanghai, Calcutta [India] and Sao Paulo [Brazil] are not going to get the energy they need through solar panels and windmills. Solid base power is needed. Most of that is currently provided by coal, oil and gas with CO2 emissions that threaten climate change. Nuclear power can provide [a] base load without such emissions.

What role should South Korea play?

In Korea and other countries, we must seek to make nuclear energy more understandable to the public - as we understand the benefits and risks of gravity and heat. This is not easy, but I could mention that the issue of disposal of highly radioactive waste no longer provokes serious public resistance in my own country or in Finland.

North Korea has not shown much flexibility in its position at the six-party talks.

I doubt that the North Korean nuclear positions depend only upon how much economic assistance is offered. ... I think it will also depend upon offers to North Korea to return to international intercourse, including diplomatic relations. I am not critical of the position taken vis-a-vis North Korea in the last few years. While I fully understand that provocations must be firmly answered and economic assistance can be withheld to exert pressure, I think any posture including military threats are counterproductive. Insulting rhetoric is also, I believe, unhelpful - even though it is richly used by the North itself. I think the search must be for a long-term regional security order that avoids fuel-cycle activities [enrichment and reprocessing] both in the South and the North and that will be effectively verified and combined with an assurance of supply of nuclear fuel for power reactors.

The United States has not been very proactive in trying to resolve the North Korean nuclear weapons issue.

I think the Bush administration was too prone to wave a big stick and to humiliate both North Korea and Iran. The use of the expression “axis of evil” was one example. Such postures may gain support and votes in the domestic sphere, but will not facilitate serious negotiations. The Obama administration, I think, is firm but not humiliating in its posture. I think it is valuable that both President Obama and [Russian ]President [Dmitry] Medvedev declared their support for the elimination of nuclear weapons and that the five nuclear weapon states recognized their obligation under the Nuclear Non-Proliferation Treaty to move toward nuclear disarmament.